Rest Harrow A Comedy of Resolution 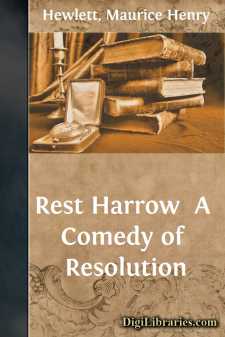 An observant traveller, homing to England by the Ostend-Dover packet in the April of some five years ago, relished the vagaries of a curious couple who arrived by a later train, and proved to be both of his acquaintance. He had happened to be early abroad, and saw them come on. They were a lady of some personal attraction, comfortably furred, who, descending from a first-class carriage, was met by a man from a third- class, bare-headed, free in the neck, loosely clad in grey flannel trousers which flapped about his thin legs in the sea-breeze, a white sweater with a rolling collar, and a pair of sandals upon brown and sinewy feet uncovered by socks: these two. The man's garniture was extraordinary, but himself no less so. He had a lean and deeply bronzed face, hatchet- shaped like a Hindoo's. You looked instinctively for rings in his ears. His moustache was black and sinuous, outlining his mouth rather than hiding it. His hair, densely black, was longish and perfectly straight. His eyes were far-sighted and unblinking; he smiled always, but furtively, as if the world at large amused him, but must never know it. He seemed to observe everything, except the fact that everybody observed himself.

To have once seen such a man must have provided for his recollection; and yet our traveller, who was young and debonnaire, though not so young as he seemed, first recognised the lady. "Mrs. Germain, by George!" This to himself, but aloud, "Now, where's she been all this time?" The frown which began to settle about his discerning eyes speedily dissolved in wonder as they encountered the strange creature in the lady's company. He stared, he gaped, then slapped his thigh. "Jack Senhouse! That's the man. God of battles, what a start! Now, what on earth is Jack Senhouse doing, playing courier to Mrs. Germain?"

That was precisely the employment. His man had handed the lady out of her compartment, entered it when she left it, and was possessing himself of her littered vestiges while these speculations were afloat. Dressing-case, tea-basket, umbrellas, rugs, and what not, he filled his arms with them, handed them over to expectant porters, then smilingly showed their proprietress the carriage ridded. He led the way to the steamer, deposited his burdens and saw to the bestowal of others, fetched a chair, wrapped her in rugs, found her book, indicated her whereabouts to a mariner in case of need. All this leisurely done, in the way of a man who has privilege and duty for his warrants. Enquiring then, with an engaging lift of the eyebrows, whether she was perfectly comfortable, and receiving with a pleasant nod her answering nod of thanks, he left her and returned to the train. Tracked through the crowd, and easily by his height, bare head, and leisurely motions, he was next seen shouldering a canvas bag on his way back to the boat. Jack's belongings, his bag of tricks; Jack all over, the same inexhaustible Jack! It was delightful to our traveller to find Jack Senhouse thus verifying himself at every turn....