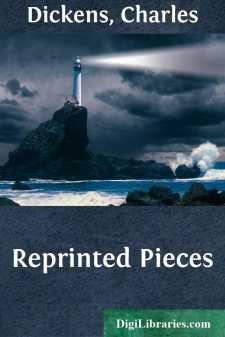 A POOR MAN'S TALE OF A PATENT

I AM not used to writing for print. What working-man, that never labours less (some Mondays, and Christmas Time and Easter Time excepted) than twelve or fourteen hours a day, is? But I have been asked to put down, plain, what I have got to say; and so I take pen-and-ink, and do it to the best of my power, hoping defects will find excuse.

I was born nigh London, but have worked in a shop at Birmingham (what you would call Manufactories, we call Shops), almost ever since I was out of my time. I served my apprenticeship at Deptford, nigh where I was born, and I am a smith by trade. My name is John. I have been called 'Old John' ever since I was nineteen year of age, on account of not having much hair. I am fifty-six year of age at the present time, and I don't find myself with more hair, nor yet with less, to signify, than at nineteen year of age aforesaid.

I have been married five and thirty year, come next April. I was married on All Fools' Day. Let them laugh that will. I won a good wife that day, and it was as sensible a day to me as ever I had.

We have had a matter of ten children, six whereof are living. My eldest son is engineer in the Italian steam-packet 'Mezzo Giorno, plying between Marseilles and Naples, and calling at Genoa, Leghorn, and Civita Vecchia.' He was a good workman. He invented a many useful little things that brought him in - nothing. I have two sons doing well at Sydney, New South Wales - single, when last heard from. One of my sons (James) went wild and for a soldier, where he was shot in India, living six weeks in hospital with a musket-ball lodged in his shoulder-blade, which he wrote with his own hand. He was the best looking. One of my two daughters (Mary) is comfortable in her circumstances, but water on the chest. The other (Charlotte), her husband run away from her in the basest manner, and she and her three children live with us. The youngest, six year old, has a turn for mechanics.

I am not a Chartist, and I never was. I don't mean to say but what I see a good many public points to complain of, still I don't think that's the way to set them right. If I did think so, I should be a Chartist. But I don't think so, and I am not a Chartist. I read the paper, and hear discussion, at what we call 'a parlour,' in Birmingham, and I know many good men and workmen who are Chartists. Note. Not Physical force.

It won't be took as boastful in me, if I make the remark (for I can't put down what I have got to say, without putting that down before going any further), that I have always been of an ingenious turn. I once got twenty pound by a screw, and it's in use now. I have been twenty year, off and on, completing an Invention and perfecting it. I perfected of it, last Christmas Eve at ten o'clock at night. Me and my wife stood and let some tears fall over the Model, when it was done and I brought her in to take a look at it.

A friend of mine, by the name of William Butcher, is a Chartist. Moderate. He is a good speaker. He is very animated....