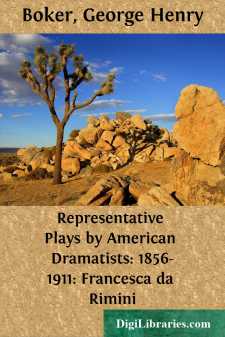 The name of George Henry Boker suggests a coterie of friendships—a group of men pledged to the pursuit of letters, and worshippers at the shrine of poetry. These men, in the pages of whose published letters and impressions are embedded many pleasing aspects of Boker's temperament and character, were Bayard Taylor, Richard Henry Stoddard, and Charles Godfrey Leland, the latter known familiarly in American literature as "Hans Breitmann." These four, in different periods of their lives, might have been called "the inseparables"—so closely did they watch each other's development, so intently did they await each other's literary output, and write poetry to each other, and meet at Boker's, now and again, for golden talks on Sundays. Poetry was a passion with them, and even when two—Boker and Taylor—were sent abroad on diplomatic missions, they could never have been said to desert the Muse—their literary activity was merely arrested. One of the four—Stoddard—often felt, in the presence of Boker, a certain reticence due to lack of educational advantages; but in the face of Boker's graciousness—a quality which comes with culture in its truest sense,—he soon found himself writing Boker on matters of style, on qualities of English diction, and on the status of American letters—a stock topic of conversation those days.

Boker was a Philadelphian, born there on October 6, 1823,—the son of Charles S. Boker, a wealthy banker, whose financial expertness weathered the Girard National Bank through the panic years of 1838-40, and whose honour, impugned after his death, in 1857, was defended many years later by his son in "The Book of the Dead," reflective of Tennyson's "In Memoriam," and marked by a triteness of phrase which was always Boker's chief limitation, both as a poet and as a dramatist.

He was brought up in an atmosphere of ease and refinement, receiving his preparatory education in private schools, and entering Princeton in 1840. On the testimony of Leland, who, being related to Boker, was thrown with him in their early years, and who avows that he always showed a love for the theatre, we learn that the young college student bore that same distinction of manner which had marked him as a child, and was to cling to him as a diplomat. Together as boys, these two would read their "Percy's Reliques," "Don Quixote," Byron and Scott—and while they were both in Princeton, Boker's room possessed the only carpet in the dormitory, and his walls boasted shelves of the handsomest books in college.

"As a mere schoolboy," wrote Leland, "Boker's knowledge of poetry was remarkable. I can remember that he even at nine years of age manifested that wonderful gift that caused him many years after to be characterized by some great actor—I think it was Forrest—as the best reader in America…. While at college … Shakespeare and Byron were his favourites. He used to quiz me sometimes for my predilections for Wordsworth and Coleridge. We both loved Shelly passionately."

In fact, Leland claims that Boker was given to ridicule the "Lakers;" had he studied them instead, he would have added to his own poetry a naturalness of expression which it lacked....