Reply of the Philadelphia Brigade Association to the Foolish and Absurd Narrative of Lieutenant Frank A. Haskell 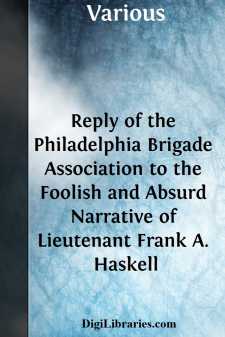 At the stated meeting of the Survivors of the Philadelphia Brigade, Second Brigade, Second Division, Second Corps, Army of the Potomac, held at the above place, Tuesday evening, September 7, 1909, letters were read from Gen. Alexander S. Webb, who commanded the Philadelphia Brigade at the Battle of Gettysburg, July 1, 2 and 3, 1863, requesting the consideration of the Brigade Association to the most astounding misstatements made by First Lieut. Frank Aretas Haskell, 6th Wisconsin Infantry, in a paper said to have been written by him under date of July 16, 1863, two weeks after the Battle of Gettysburg had been fought and addressed to his brother, who printed it for private circulation about fifteen years afterward.

The letters of Gen. Webb were accompanied by a volume of 94 pages, containing the most absurd statements as to the action of the Philadelphia Brigade at the Battle of Gettysburg, which, upon being read, led to the unanimous adoption of the following preamble and resolution:

“WHEREAS, in the ‘Narrative of the Battle of Gettysburg,’ by Lieut. Frank A. Haskell, First Lieut. 6th Wisconsin Infantry, and an aide upon the staff of Gen. John Gibbon, said to have been written within a few days after the battle, and reprinted in 1898 as a part of the history of the Class of 1854, Dartmouth College, and republished in 1908 under the auspices of the Massachusetts Commandery of the Military Order of the Loyal Legion of the United States, the Philadelphia Brigade has been recklessly, and shamelessly, and grossly misrepresented; therefore, with the view of correcting these wilfull misstatements, it is

“RESOLVED, That a committee consisting of the officers of the Philadelphia Brigade Association, together with two comrades from each of the four regiments of the Brigade, be appointed to carefully consider the matter, and, if deemed advisable by the committee, to publicly enter its protest against the malicious statements ‘reprinted in 1898 as a part of the history of the Class of 1854 of Dartmouth College,’ and again republished by the Loyal Legion of Massachusetts in 1908, with a degree of recklessness and disregard for truth unparalleled in any publication relating to the Civil War; statements so false and malevolent as to be wholly unworthy of a class of Dartmouth College, or of a Commandery of the Loyal Legion of the United States; of the name of Capt. Daniel Hall, of General Howard’s staff—who prepared the story for publication—or of ‘Chas. Hunt, Captain U. S. V., Committee on Publication.’”

An examination by the Philadelphia Brigade Association of the records relating to the “Narrative” written by Lieut. Haskell, discloses these facts:

First—That Lieut. Haskell entered the service in July, 1861, as First Lieutenant of the 6th Wisconsin Infantry, and in June, 1862, became an Aide-de-Camp upon the Staff of Brigadier General John Gibbon, and was serving as such at the time he wrote his “Narrative” of the Battle of Gettysburg. On February 9, 1864, Haskell was commissioned Colonel of the 36th Wisconsin Regiment, which at his request was assigned to the First Brigade, Second Division, Second Corps, Army of the Potomac. The Division was commanded by Gen. Gibbon, Gen. Hancock commanding the Corps....