Renaissance in Italy, Volumes 1 and 2 The Catholic Reaction 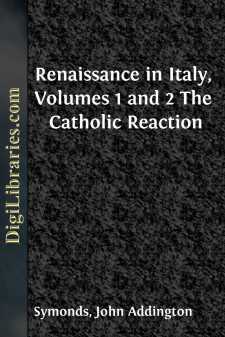 CHAPTER I THE SPANISH HEGEMONY

Italy in the Renaissance—The Five Great Powers—The Kingdom of Naples—The Papacy—The Duchy of Milan—Venice—The Florentine Republic—Wars of Invasion closed by the Sack of Rome in 1527—Concordat between Clement VII. and Charles V.—Treaty of Barcelona and Paix des Dames—Charles lands at Genoa—His Journey to Bologna—Entrance into Bologna and Reception by Clement—Mustering of Italian Princes—Francesco Sforza replaced in the Duchy of Milan—Venetian Embassy—Italian League signed on Christmas Eve, 1529—Florence alone excluded—The Siege of Florence pressed by the Prince of Orange—Charles's Coronation as King of Italy and Holy Roman Emperor—The Significance of this Ceremony at Bologna—Ceremony in S. Petronio—Settlement of the Duchy of Ferrara—Men of Letters and Arts at Bologna—The Emperor's Use of the Spanish Habit—Charles and Clement leave Bologna in March, 1530—Review of the Settlement of Italy effected by Emperor and Pope—Extinction of Republics—Subsequent Absorption of Ferrara and Urbino into the Papal States—Savoy becomes an Italian Power—Period between Charles's Coronation and the Peace of Cateau Cambresis in 1559—Economical and Social Condition of the Italians under Spanish Hegemony—The Nation still Exists in Separate Communities—Intellectual Conditions—Predominance of Spain and Rome—Both Cosmopolitan Powers—Leveling down of the Component Portions of the Nation in a Common Servitude—The Evils of Spanish Rule.

In the first volume of my book on Renaissance in Italy I attempted to set forth the political and social phases through which the Italians passed before their principal States fell into the hands of despots, and to explain the conditions of mutual jealousy and military feebleness which exposed those States to the assaults of foreign armies at the close of the fifteenth century.

In the year 1494, when Charles VIII. of France, at Lodovico Sforza's invitation, crossed the Alps to make good his claim on Naples, the peninsula was Independent. Internal peace had prevailed for a period of nearly fifty years. An equilibrium had been established between the five great native Powers, which secured the advantages of confederation and diplomatic interaction.

While using the word confederation, I do not, of course, imply that anything similar to the federal union of Switzerland or of North America existed in Italy. The contrary is proved by patent facts. On a miniature scale, Italy then displayed political conditions analogous to those which now prevail in Europe. The parcels of the nation adopted different forms of self-government, sought divers foreign alliances, and owed no allegiance to any central legislative or administrative body. I therefore speak of the Italian confederation only in the same sense as Europe may now be called a confederation of kindred races.

In the year 1630, when Charles V. (of Austria and Spain) was crowned Emperor at Bologna, this national independence had been irretrievably lost by the Italians....