Reminiscences The Story of an Emigrant 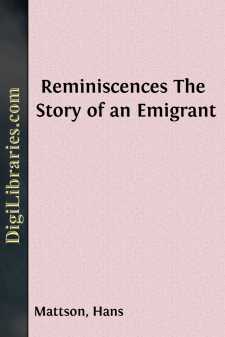 My childhood passed so quietly and smoothly that it would be superfluous to mention it at all, except for the fact that such omission would leave a gap in these reminiscences. For this reason, and, also, in order that the American reader may get some idea of a good country home in Sweden, I shall relate very briefly some incidents from that time.

My parents belonged to one of those old families of proprietary farmers, whose spirit of independence and never failing love of liberty, have, from time immemorial, placed Sweden, as a land of constitutional liberty, in the front rank among all the countries of the Old World.

Like the descendants of the old Scotch clans the ancestors of my father were noted for certain physical and mental qualities, which made them prominent among the inhabitants of the district of Villand, Skåne, where most of them had their home. They were independent freeholders and were generally reckoned among the leading men of their district. They were large and strong with broad shoulders, high and broad foreheads and other family characteristics. The christian names of the male members were generally Bonde, Trued, Lars, Matts, and Hans, and the family can be traced back in the parish records for more than two hundred years.

My mother was born on the island of Ifö, my father’s family also came from that island and were the owners of the estate described by Du Chaillu in his “Land of the Midnight Sun” with the remarkable crypt built by Bishop Andreas Suneson and the estate still belongs to a second cousin of mine. My father inherited a small sum of money for which, at the time of his marriage, he bought a land in the parish of Önnestad near the city of Kristianstad. On this property he built a small house, barn, etc., and on the south side of the former a small flower garden was laid out at either end of which my father planted a spruce tree, one of which grew up into a fine, big tree, the only one of its kind in the whole neighborhood, and to which I shall refer farther on. In this unpretending little cabin I was born Dec. 23d, 1832, and under its lowly but peaceful roof I spent the first years of my childhood, together with an elder sister and a younger brother.

I can yet distinctly remember many incidents from my childhood as far back as my third and fourth year; all these memories are dear and exceedingly pleasant to me. There was no discord, no cause for sorrow and tears in my home during the time of my childhood. Everything bore the stamp of peace and calm, emanating from that spirit of genuine old Swedish honesty and sincere piety, which animated my parents. One of my very first recollections is of my father reading aloud the beautiful hymn:

“The morning light shall wake meTo the strains of sacred song,” etc.

At the age of six my schooling commenced under the guidance of an itinerant schoolmaster by name of Bergdahl, who taught small children at their homes, stopping one day for each child at every house and keeping on in that way the whole term which lasted from three to four months. Old Bergdahl was a good and sensible man, far superior to the average men of his class. He seldom punished his pupils except by appealing to their better nature, and still maintained the best discipline that I have ever seen in any school of even greater pretensions.

My parents were doing well on their little farm, which they sold about this time, buying a larger one on the Önnestad Hills....