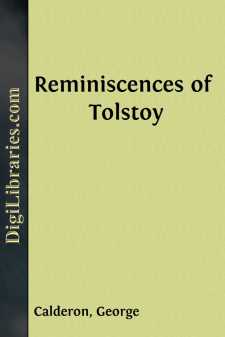 REMINISCENCES OF TOLSTOY (Part I.)

IN one of his letters to his great-aunt, Alexandra Andreyevna Tolstoy, my father gives the following description of his children:

The eldest [Sergei] is fair-haired and good-looking; there is something weak and patient in his expression, and very gentle. His laugh is not infectious; but when he cries, I can hardly refrain from crying, too. Every one says he is like my eldest brother.

I am afraid to believe it. It is too good to be true. My brother's chief characteristic was neither egotism nor self-renunciation, but a strict mean between the two. He never sacrificed himself for any one else; but not only always avoided injuring others, but also interfering with them. He kept his happiness and his sufferings entirely to himself.

Ilya, the third, has never been ill in his life; broad-boned, white and pink, radiant, bad at lessons. Is always thinking about what he is told not to think about. Invents his own games. Hot-tempered and violent, wants to fight at once; but is also tender-hearted and very sensitive. Sensuous; fond of eating and lying still doing nothing.

Tanya [Tatyana] is eight years old. Every one says that she is like Sonya, and I believe them, although I am pleased about that, too; I believe it only because it is obvious. If she had been Adam's eldest daughter and he had had no other children afterward, she would have passed a wretched childhood. The greatest pleasure that she has is to look after children.

The fourth is Lyoff. Handsome, dexterous, good memory, graceful. Any clothes fit him as if they had been made for him. Everything that others do, he does very skilfully and well. Does not understand much yet.

The fifth, Masha [Mary] is two years old, the one whose birth nearly cost Sonya her life. A weak and sickly child. Body white as milk, curly white hair; big, queer blue eyes, queer by reason of their deep, serious expression. Very intelligent and ugly. She will be one of the riddles; she will suffer, she will seek and find nothing, will always be seeking what is least attainable.

The sixth, Peter, is a giant, a huge, delightful baby in a mob-cap, turns out his elbows, strives eagerly after something. My wife falls into an ecstasy of agitation and emotion when she holds him in her arms; but I am completely at a loss to understand. I know that he has a great store of physical energy, but whether there is any purpose for which the store is wanted I do not know. That is why I do not care for children under two or three; I don't understand.

This letter was written in 1872, when I was six years old. My recollections date from about that time. I can remember a few things before.

FAMILY LIFE IN THE COUNTRY

FROM my earliest childhood until the family moved into Moscow—that was in 1881—all my life was spent, almost without a break, at Yasnaya Polyana.

This is how we live. The chief personage in the house is my mother. She settles everything. She interviews Nikolai, the cook, and orders dinner; she sends us out for walks, makes our shirts, is always nursing some baby at the breast; all day long she is bustling about the house with hurried steps....