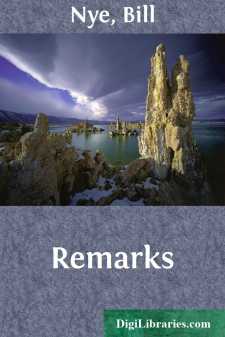 Looking over my own school days, there are so many things that I would rather not tell, that it will take very little time and space for me to use in telling what I am willing that the carping public should know about my early history.

I began my educational career in a log school house. Finding that other great men had done that way, I began early to look around me for a log school house where I could begin in a small way to soak my system full of hard words and information.

For a time I learned very rapidly. Learning came to me with very little effort at first. I would read my lesson over once or twice and then take my place in the class. It never bothered me to recite my lesson and so I stood at the head of the class. I could stick my big toe through a knot-hole in the floor and work out the most difficult problem. This became at last a habit with me. With my knot-hole I was safe, without it I would hesitate.

A large red-headed boy, with feet like a summer squash and eyes like those of a dead codfish, was my rival. He soon discovered that I was very dependent on that knot-hole, and so one night he stole into the school house and plugged up the knot-hole, so that I could not work my toe into it and thus refresh my memory.

Then the large red-headed boy, who had not formed the knot-hole habit went to the head of the class and remained there.

After I grew larger, my parents sent me to a military school. That is where I got the fine military learning and stately carriage that I still wear.

My room was on the second floor, and it was very difficult for me to leave it at night, because the turnkey locked us up at 9 o'clock every evening. Still, I used to get out once in a while and wander around in the starlight. I did not know yet why I did it, but I presume it was a kind of somnambulism. I would go to bed thinking so intently of my lessons that I would get up and wander away, sometimes for miles, in the solemn night.

One night I awoke and found myself in a watermelon patch. I was never so ashamed in my life. It is a very serious thing to be awakened so rudely out of a sound sleep, by a bull dog, to find yourself in the watermelon vineyard of a man with whom you are not acquainted. I was not on terms of social intimacy with this man or his dog. They did not belong to our set. We had never been thrown together before.

After that I was called the great somnambulist and men who had watermelon conservatories shunned me. But it cured me of my somnambulism. I have never tried to somnambule any more since that time.

There are other little incidents of my schooldays that come trooping up in my memory at this moment, but they were not startling in their nature. Mine is but the history of one who struggled on year after year, trying to do better, but most always failing to connect. The boys of Boston would do well to study carefully my record and then—do differently.

Mr. Webster, no doubt, had the best command of language of any American author prior to our day....