Religion and Theology: A Sermon for the Times Preached in the Parish Church of Crathie, fifth September and in the College Church, St Andrews 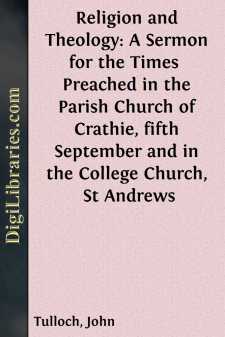 RELIGION AND THEOLOGY. 2 Cor. xi. 3.—"The simplicity that is in Christ."

There is much talk in the present time of the difficulties of religion. And no doubt there is a sense in which religion is always difficult. It is hard to be truly religious—to be humble, good, pure, and just; to be full of faith, hope, and charity, so that our conduct may be seen to be like that of Christ, and our light to shine before men. But when men speak so much nowadays of the difficulties of religion, they chiefly mean intellectual and not practical difficulties. Religion is identified with the tenets of a Church system, or of a theological system; and it is felt that modern criticism has assailed these tenets in many vulnerable points, and made it no longer easy for the open and well-informed mind to believe things that were formerly held, or professed to be held, without hesitation. Discussions and doubts which were once confined to a limited circle when they were heard of at all, have penetrated the modern mind through many avenues, and affected the whole tone of social intelligence. This is not to be denied. For good or for evil such a result has come about; and we live in times of unquiet thought, which form a real and painful trial to many minds. It is not my intention at present to deplore or to criticise this modern tendency, but rather to point out how it may be accepted, and yet religion in the highest sense saved to us, if not without struggle (for that is always impossible in the nature of religion), yet without that intellectual conflict for which many minds are entirely unfitted, and which can never be said in itself to help religion in any minds.

The words which I have taken as my text seem to me to suggest a train of thought having an immediate bearing on this subject. St Paul has been speaking of himself in the passage from which the text is taken. He has been commending himself—a task which is never congenial to him. But his opponents in the Corinthian Church had forced this upon him; and now he asks that he may be borne with a little in "his folly." He is pleased to speak of his conduct in this way, with that touch of humorous irony not unfamiliar to him when writing under some excitement. He pleads with his old converts for so much indulgence, because he is "jealous over them with a godly jealousy." He had won them to the Lord. "I have espoused you," he says, "to one husband, that I may present you as a chaste virgin to Christ." This had been his unselfish work. He had sought nothing for himself, but all for Christ. That they should belong to Christ—as the bride to the bridegroom—was his jealous anxiety. But others had come in betwixt them and him—nay, betwixt them and Christ, as he believed—and sought to seduce and corrupt their minds by divers doctrines. "I fear, lest by any means, as the serpent beguiled Eve through his subtilty, so your minds should be corrupted from the simplicity that is in Christ."

What the special corruptions from Christian simplicity were with which the minds of St Paul's Corinthian converts were assailed, it is not necessary for us now to inquire....