Reincarnation and the Law of Karma A Study of the Old-New World-Doctrine of Rebirth, and Spiritual Cause and Effect 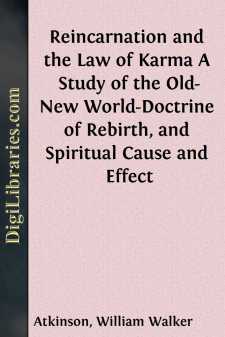 Add to My Favorites
Published: 9 years ago
Downloads: 204
Rating: (0 Votes)

CHAPTER I. The Early Races.

By "Reincarnation" we mean the repeated incarnation, or embodiment in flesh, of the soul or immaterial part of man's nature. The term "Metempsychosis" is frequently employed in the same sense, the definition of the latter term being: "The passage of the soul, as an immortal essence, at the death of the body, into another living body." The term "Transmigration of Souls" is sometimes employed, the term being used in the sense of "passing from one body into another." But the term "Transmigration" is often used in connection with the belief of certain undeveloped races who held that the soul of men sometimes passed into the bodies of the lower animals, as a punishment for their sins committed during the human life. But this belief is held in disrepute by the adherents of Reincarnation or Metempsychosis, and has no connection with their philosophy or beliefs, the ideas having sprung from an entirely different source, and having nothing in common.

There are many forms of belief—many degrees of doctrine—regarding Reincarnation, as we shall see as we proceed, but there is a fundamental and basic principle underlying all of the various shades of opinion, and divisions of the schools. This fundamental belief may be expressed as the doctrine that there is in man an immaterial Something (called the soul, spirit, inner self, or many other names) which does not perish at the death or disintegration of the body, but which persists as an entity, and after a shorter or longer interval of rest reincarnates, or is re-born, into a new body—that of an unborn infant—from whence it proceeds to live a new life in the body, more or less unconscious of its past existences, but containing within itself the "essence" or results of its past lives, which experiences go to make up its new "character," or "personality." It is usually held that the rebirth is governed by the law of attraction, under one name or another, and which law operates in accordance with strict justice, in the direction of attracting the reincarnating soul to a body, and conditions, in accordance with the tendencies of the past life, the parents also attracting to them a soul bound to them by some ties in the past, the law being universal, uniform, and equitable to all concerned in the matter. This is a general statement of the doctrine as it is generally held by the most intelligent of its adherents.

E. D. Walker, a well-known English writer on the subject, gives the following beautiful idea of the general teachings: "Reincarnation teaches that the soul enters this life, not as a fresh creation, but after a long course of previous existences on this earth and elsewhere, in which it acquired its present inhering peculiarities, and that it is on the way to future transformations which the soul is now shaping. It claims that infancy brings to earth, not a blank scroll for the beginning of an earthly record, nor a mere cohesion of atomic forces into a brief personality, soon to dissolve again into the elements, but that it is inscribed with ancestral histories, some like the present scene, most of them unlike it and stretching back into the remotest past....