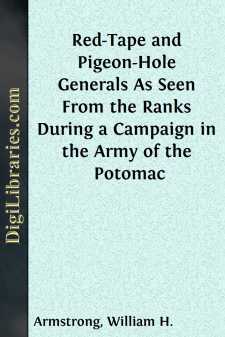 "Greek-fire has shivered the statue of John C. Calhoun in the streets of the City of Charleston,"—so the papers say. Whether true or not, the Greek-fire of the righteous indignation of a loyal people is fast shattering the offspring of his infamous teachings,—the armed treason of the South, and its more cowardly ally the insidious treachery that lurks under doubtful cover in the loyal States. In thunder tones do the masses declare, that now and for ever, they repudiate the Treason and despise the Traitor. Nobly are the hands of our Honest President sustained in prosecuting this most righteous war.

In a day like this, the least that can be expected of any citizen is—duty. We are all co-partners in our beneficent government. We should be co-laborers for her defence. Jealous of the interests of her brave soldiery; for they are our own. Proud of their noble deeds; they constitute our National Heritage.

If these campaign sketches, gathered in actual service during 1862-3, and grouped during the spare hours of convalescence from a camp fever, correct one of the least of the abuses in our military machinery—if they lighten the toil of the humblest of our soldiers, or nerve anew the resolves of loyalty tempted to despair, the writer will have no reason to complain of labor lost. Great latitude of excuse for the existence of abuses must be allowed, when we consider the suddenness with which our volunteers sprang into ranks at the outset of the Rebellion. Now that the warfare is a system, there is less reason for their continuance. Reformers must, however, remember, that to keep our citizen-soldiery effective, they must not make too much of the citizen and too little of the soldier. Abuses must be corrected under the laws; but to be corrected at all they must first be exposed.

Drunkenness, half-heartedness, and senseless routine, have done much to cripple the patriotic efforts of our people. The patriotism of the man who at this day doubts the policy of their open reproof can well be questioned. West Point has, in too many instances, nursed imbecility and treason; but in our honest contempt for the small men of whom, in common with other institutions, she has had her share,—we must not ignore those bright pages of our history adorned with the skill and heroism of her nobler sons. McClellanism did not follow its chief from Warrenton; or Burnside's earnestness, Hooker's dash, and Meade's soldierly stand at Gettysburg, backed as they were by the heroic fighting of the Army of the Potomac, would have had, as they deserved, more decisive results.

The Young Men of the Land would the writer address in the following pages—"because they are strong," and in their strength is the nation's hope. In certain prospect of victory over the greatest enemy we have yet had as a nation—the present infamous rebellion—we can well await patiently the correction of minor evils.

"Meanwhile we'll sacrifice to liberty,Remember, O my friends! the laws, the rights,The generous plan of power delivered downFrom age to age by your renowned forefathers,(So dearly bought, the price of so much blood;)Oh, let it never perish in your hands...!
Show more
Show less