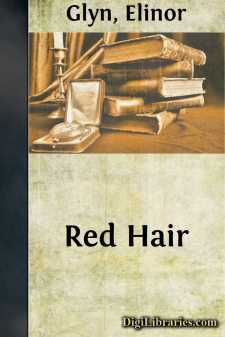 I wonder so much if it is amusing to be an adventuress, because that is evidently what I shall become now. I read in a book all about it; it is being nice looking and having nothing to live on, and getting a pleasant time out of life—and I intend to do that! I have certainly nothing to live on, for one cannot count £300 a year; and I am extremely pretty, and I know it quite well, and how to do my hair, and put on my hats, and those things—so, of course, I am an adventuress! I was not intended for this rôle—in fact, Mrs. Carruthers adopted me on purpose to leave me her fortune, as at that time she had quarrelled with her heir, who was bound to get the place. Then she was so inconsequent as not to make a proper will—thus it is that this creature gets everything, and I nothing!

I am twenty, and up to the week before last, when Mrs. Carruthers got ill and died in one day, I had had a fairly decent time at odd moments when she was in a good temper.

There is no use pretending even when people are dead, if one is writing down one's real thoughts. I detested Mrs. Carruthers most of the time. A person whom it was impossible to please. She had no idea of justice, or of anything but her own comfort, and what amount of pleasure other people could contribute to her day.

How she came to do anything for me at all was because she had been in love with papa, and when he married poor mamma—a person of no family—and then died, she offered to take me, and bring me up, just to spite mamma, she has often told me. As I was only four I had no say in the matter, and if mamma liked to give me up that was her affair. Mamma's father was a lord, and her mother I don't know who, and they had not worried to get married, so that is how it is poor mamma came to have no relations. After papa was dead, she married an Indian officer and went off to India, and died, too, and I never saw her any more—so there it is; there is not a soul in the world who matters to me, or I to them, so I can't help being an adventuress, and thinking only of myself, can I?

Mrs. Carruthers periodically quarrelled with all the neighbors, so beyond frigid calls now and then in a friendly interval, we never saw them much. Several old, worldly ladies used to come and stay, but I liked none of them, and I have no young friends. When it is getting dark, and I am up here alone, I often wonder what it would be like if I had—but I believe I am the kind of cat that would not have got on with them too nicely—so perhaps it is just as well. Only, to have had a pretty—aunt, say—to love one—that might have been nice.

Mrs. Carruthers had no feelings like this; "stuff and nonsense," "sentimental rubbish," she would have called them. To get a suitable husband is what she brought me up for, she said, and for the last years had arranged that I should marry her detested heir, Christopher Carruthers, as I should have the money and he the place.

He is a diplomat, and lives in Paris, and Russia, and amusing places like that, so he does not often come to England....