Recollections of My Youth 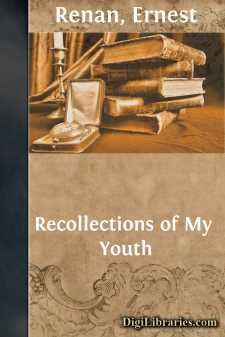 Tréguier, my native place, has grown into a town out of an ancient monastery founded at the close of the fifth century by St. Tudwal (or Tual), one of the religious leaders of those great migratory movements which introduced into the Armorican peninsula the name, the race, and the religious institutions of the island of Britain. The predominating characteristic of early British Christianity was its monastic tendency, and there were no bishops, at all events among the immigrants, whose first step, after landing in Brittany, the north coast of which must at that time have been very sparsely inhabited, was to build large monasteries, the abbots of which had the cure of souls. A circle of from three to five miles in circumference, called the minihi, was drawn around each monastery, and the territory within it was invested with special privileges.

The monasteries were called in the Breton dialect pabu after the monks (papae), and in this way the monastery of Tréguier was known as Pabu Tual.

It was the religious centre of all that part of the peninsula which stretches northward. Monasteries of a similar kind at St. Pol de Léon, St. Brieuc, St. Malo, and St. Samson, near Dol, held a like position upon the coast. They possessed, if one may so speak, their diocese, for in these regions separated from the rest of Christianity nothing was known of the power of Rome and of the religious institutions which prevailed in the Latin world, or even in the Gallo-Roman towns of Rennes and Nantes, hard by.

When Noménoé, in the ninth century, reduced to something like a regular organisation this half savage society of emigrants and created the Duchy of Brittany by annexing to the territory in which the Breton tongue was spoken, the Marches of Brittany, established by the Carlovingians to hold in respect the forayers of the west, he found it advisable to assimilate its religious organisation to that of the rest of the world. He determined, therefore, that there should be bishops on the northern coast, as there were at Rennes, Nantes, and Vannes, and he accordingly converted into bishoprics the monasteries of St. Pol de Léon, Tréguier, St. Brieuc, St. Malo, and Dol. He would have liked to have had an archbishop as well and so form a separate ecclesiastical province, but, despite the well-intentioned devices employed to prove that St. Samson had been a metropolitan prelate, the grades of the Church universal were already apportioned, and the new bishoprics were perforce compelled to attach themselves to the nearest Gallo-Roman province at Tours.

The meaning of these obscure beginnings gradually faded away, and from the name of Pabu Tual, Papa Tual, found, as was reported, upon some old stained-glass windows, it was inferred that St. Tudwal had been Pope. The explanation seemed a very simple one, for St. Tudwal, it was well known, had been to Rome, and he was so holy a man that what could be more natural than that the cardinals, when they became acquainted with him, should have selected him for the vacant See....