Recollections of My Childhood and Youth 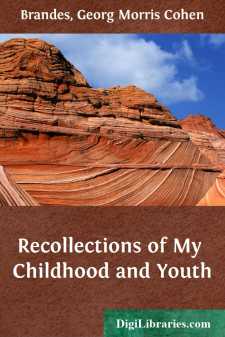 He was little and looked at the world from below. All that happened, went on over his head. Everyone looked down to him.

But the big people possessed the enviable power of lifting him to their own height or above it. It might so happen that suddenly, without preamble, as he lay on the floor, rummaging and playing about and thinking of nothing at all, his father or a visitor would exclaim: "Would you like to see the fowls of Kjöge?" And with the same he would feel two large hands placed over his ears and the arms belonging to them would shoot straight up into the air. That was delightful. Still, there was some disappointment mingled with it. "Can you see Kjöge now?" was a question he could make nothing of. What could Kjöge be? But at the other question: "Do you see the fowls?" he vainly tried to see something or other. By degrees he understood that it was only a phrase, and that there was nothing to look for.

It was his first experience of empty phrases, and it made an impression.

It was just as great fun, though, when the big people said to him: "Would you like to be a fat lamb? Let us play at fat lamb." He would be flung over the man's shoulder, like a slaughtered lamb, and hang there, or jump up and ride with his legs round the man's hips, then climb valiantly several steps higher, get his legs round his shoulders, and behold! be up on the giddy height! Then the man would take him round the waist, swing him over, and after a mighty somersault in the air, he would land unscathed on his feet upon the floor. It was a composite kind of treat, of three successive stages: first came the lofty and comfortable seat, then the more interesting moment, with a feeling, nevertheless, of being on the verge of a fall, and then finally the jump, during which everything was upside down to him.

But, too, he could take up attitudes down on the floor that added to his importance, as it were, and obliged the grown-up people to look at him. When they said: "Can you stand like the Emperor Napoleon?" he would draw himself up, bring one foot a little forward, and cross his arms like the little figure on the bureau.

He knew well enough just how he had to look, for when his stout, broad- shouldered Swedish uncle, with the big beard and large hands, having asked his parents about the little fellow's accomplishments, placed himself in position with his arms crossed and asked: "Who am I like?" he replied: "You are like Napoleon's lackey." To his surprise, but no small delight, this reply elicited a loud exclamation of pleasure from his mother, usually so superior and so strict, and was rewarded by her, who seldom caressed, with a kiss.

The trying moment of the day was when he had to go to bed. His parents were extraordinarily prejudiced about bedtime, just when he was enjoying himself most. When visitors had arrived and conversation was well started—none the less interesting to him because he understood scarcely half of what was said—it was: "Now, to bed!"

But there were happy moments after he was in bed, too....