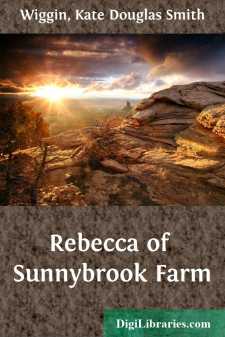 The old stage coach was rumbling along the dusty road that runs from Maplewood to Riverboro. The day was as warm as midsummer, though it was only the middle of May, and Mr. Jeremiah Cobb was favoring the horses as much as possible, yet never losing sight of the fact that he carried the mail. The hills were many, and the reins lay loosely in his hands as he lolled back in his seat and extended one foot and leg luxuriously over the dashboard. His brimmed hat of worn felt was well pulled over his eyes, and he revolved a quid of tobacco in his left cheek.

There was one passenger in the coach,—a small dark-haired person in a glossy buff calico dress. She was so slender and so stiffly starched that she slid from space to space on the leather cushions, though she braced herself against the middle seat with her feet and extended her cotton-gloved hands on each side, in order to maintain some sort of balance. Whenever the wheels sank farther than usual into a rut, or jolted suddenly over a stone, she bounded involuntarily into the air, came down again, pushed back her funny little straw hat, and picked up or settled more firmly a small pink sun shade, which seemed to be her chief responsibility,—unless we except a bead purse, into which she looked whenever the condition of the roads would permit, finding great apparent satisfaction in that its precious contents neither disappeared nor grew less. Mr. Cobb guessed nothing of these harassing details of travel, his business being to carry people to their destinations, not, necessarily, to make them comfortable on the way. Indeed he had forgotten the very existence of this one unnoteworthy little passenger.

When he was about to leave the post-office in Maplewood that morning, a woman had alighted from a wagon, and coming up to him, inquired whether this were the Riverboro stage, and if he were Mr. Cobb. Being answered in the affirmative, she nodded to a child who was eagerly waiting for the answer, and who ran towards her as if she feared to be a moment too late. The child might have been ten or eleven years old perhaps, but whatever the number of her summers, she had an air of being small for her age. Her mother helped her into the stage coach, deposited a bundle and a bouquet of lilacs beside her, superintended the "roping on" behind of an old hair trunk, and finally paid the fare, counting out the silver with great care.

"I want you should take her to my sisters' in Riverboro," she said. "Do you know Mirandy and Jane Sawyer? They live in the brick house."

Lord bless your soul, he knew 'em as well as if he'd made 'em!

"Well, she's going there, and they're expecting her. Will you keep an eye on her, please? If she can get out anywhere and get with folks, or get anybody in to keep her company, she'll do it. Good-by, Rebecca; try not to get into any mischief, and sit quiet, so you'll look neat an' nice when you get there. Don't be any trouble to Mr. Cobb.—You see, she's kind of excited.—We came on the cars from Temperance yesterday, slept all night at my cousin's, and drove from her house—eight miles it is—this morning."

"Good-by, mother, don't worry; you know it isn't as if I hadn't traveled before."

The woman gave a short sardonic laugh and said in an explanatory way to Mr....