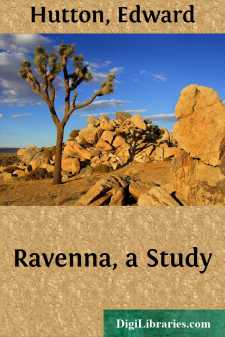 I THE GEOGRAPHICAL AND POLITICAL POSITION OF RAVENNA

Upon the loneliest and most desolate shore of Italy, where the vast monotony of the Emilian plain fades away at last, almost imperceptibly, into the Adrian Sea, there stands, half abandoned in that soundless place, and often wrapt in a white shroud of mist, a city like a marvellous reliquary, richly wrought, as is meet, beautiful with many fading colours, and encrusted with precious stones: its name is Ravenna.

It stands there laden with the mysterious centuries as with half barbaric jewels, weighed down with the ornaments of Byzantium, rigid, hieratic, constrained; and however you come to it, whether from Rimini by the lost and forgotten towns of Classis and Caesarea, or from Ferrara through all the bitter desolation of Comacchio, or across the endless marsh from Bologna or Faenza, its wide and empty horizons, its astonishing silence, and the difficulty of every approach will seem to you but a fitting environment for a place so solitary and so imperious.

For this city of mute and closed churches, where imperishable mosaics glisten in the awful damp, and beautiful pillars of most precious marbles gleam through a humid mist, of mausoleums empty but indestructible, of tottering campanili, of sumptuous splendour and incredible decay, is the sepulchre of the great civilisation which Christianity failed to save alive, but to which we owe everything and out of which we are come; the only monument that remains to us of those confused and half barbaric centuries which lie between Antiquity and the Middle Age.

Mysteriously secured by nature and doubly so after the failure of the Roman administration, Ravenna was the death-bed of the empire and its tomb. To her the emperor Honorius fled from Milan in the first years of the fifth century; within her walls Odoacer dethroned the last emperor of the West, founded a kingdom, and was in his turn supplanted by Theodoric the Ostrogoth. It was from her almost impregnable isolation that the attempt was made by Byzantium—it seemed and perhaps it was our only hope—to reconquer Italy and the West for civilisation; while her fall before the appalling Lombard onset in the eighth century brought Pepin into Italy in 754, to lay the foundation of a new Christendom, to establish the temporal power of the papacy, and to prophesy of the resurrection of the empire, of the unity of Europe.

But though it is as the imperishable monument of those tragic centuries that we rightly look upon Ravenna: before the empire was founded she was already famous. It was from her silence that Caesar emerged to cross the Rubicon and all unknowing to found what, when all is said, was the most beneficent, as it was the most universal, government that Europe has ever known. In the first years of that government Ravenna became, and through the four hundred years of its unhampered life she remained, one of its greatest bulwarks. While upon its failure, as I have said, she suddenly assumed a position which for some three hundred and fifty years was unique not only in Italy but in Europe....