Quiet Talks on the Crowned Christ of Revelation 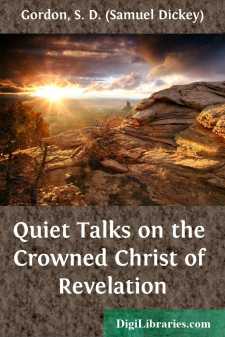 "When God sought a King for His people of old,He went to the fields to find him;A shepherd was he, with his crook and his luteAnd a following flock behind him.

"O love of the sheep, O joy of the lute,And the sling and the stone for battle;A shepherd was King, the giant was naught,And the enemy driven like cattle.

"When God looked to tell of His good will to men,And the Shepherd-King's son whom He gave them;To shepherds, made meek a-caring for sheep,He told of a Christ sent to save them.

"O love of the sheep, O watch in the night,And the glory, the message, the choir;'Twas shepherds who saw their King in the straw,And returned with their hearts all on fire.

"When Christ thought to tell of His love to the worldHe said to the throng before him,'The Good Shepherd giveth His life for the sheep—'And away to the cross they bore Him.

"O love of the sheep, O blood sweat of prayer,O man on the cross, God-forsaken;A shepherd has gone to defend all aloneThe sheepfold by death overtaken.

"When God sought a King for His people, for aye,He went to the grave to find him;And a shepherd came back, Death dead in His grasp,And a following flock behind Him.

"O love of the sheep, O life from the dead,O strength of the faint and the fearing;A shepherd is King, and His Kingdom will come.And the day of His coming is nearing." [1]

Christ is crowned. Not in any vague far-fetched meaning, but in the plain common-sense meaning of the word, He is crowned.

For crowned means put in the place of highest power, with full right to exercise that power at will. And when the crucified Jesus went up that Olivet day, before the astonished eyes of the disciples, into the sightless blue, on the cloud, He was received in the upper world by the Father. And He was lifted up into the place of highest honour and greatest power. He sat down at the right hand of the Father.[2]

He had said it would be so. Breathing the air thick with bitter hate on the night of His trial, He had quietly said to the Jewish rulers that even so it would be, bringing at once about His person the bursting of the storm of hate.[3] Now His unfaltering trust in His Father has its sweet reward.

The Holy Spirit poured out on Pentecost, the birthday of the Church, was the gift of the crowned Christ. The rushing sound as of a mighty wind that filled all the house, the tongues of flame plainly seen, the bold talking to the crowds of foreign Jews of God's mighty power, the faithful witnessing about the crucified Jesus in the city that hounded Him to death, the convinced crowds openly declaring at the peril of their lives their belief in the despised Jesus, the strangely rare unselfishness even in money matters, and the winsome graciousness of spirit that marked, not only the inner circle, but these greatly increased crowds,—all this said one thing in clear unanswerable tones of unmistakable power, Christ is crowned.[4] For the sending down of the Holy Spirit was the act of the crowned Christ....