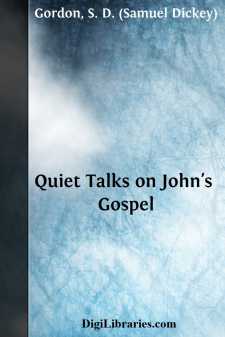 The Heart-strings of God.

There's a tense tugging at the heart of God. The heart-strings of God are tight, as tight as tight can be. For there's a tender heart that's easily tugged at one end, and an insistent tugging at the other. The tugging never ceases. The strings never slack. They give no signs of easing or getting loose.

But the heart-strings never snap. The heart itself breaks under the tension of love and grief, grieved and grieving love. But the strings only strengthen and tighten under the strain of use.

It was man's going away that stretched the heart out till the strings grew. The tragedy of sin revealed the toughness and tenderness of love. For that heart never let go of the man whom it borned. Man tried to pull away, poor thing. In his foolish misunderstanding and heady wilfulness he tried to cut loose. If he had known God better he would never have tried that. He'd never have started away; and he'd never have tried to get away.

For love never faileth. A heart—the real thing of a heart, that is, God's heart—never lets go. It breaks; but let go? not once: never yet. The breaking only loosens the red that glues fast with a tighter hold than ever. The fibre of the heart—God's heart—is made of too strong stuff to loosen or wear out or snap. Love never faileth. It can't; because it's love.

Now all this explains Jesus. It was man's pull on these heart-strings that brought Him down. The pull was so strong and steady. It grew tenser and more insistent. And straight down He came by the shortest way, the way of those same heart-strings. For the heart-strings of God are the shortest distance between two given points, the point of God's giving, going love, and the point of man's sore need, given a sharper-pointed end by its very soreness.

It is a sort of blind pull, this pull of man on the heart of God; a confused, unconscious, half-conscious, dust-blinded, slippery-road sort of pulling, but one whose tight grip never slacks. Man needs God, but does not know it. He knows he needs _some_thing. He feels that keenly. But he does not know that it's God whom he needs, with a very few rare exceptions. It doesn't seem to have entered his head that he'll never get out of his tight corner till God gets him out.

Down the street of life he goes, eyes blinded by the thick dust, ears deafened by the cries of the crowd, by the noise of the street without, and the noise of passions and fevered ambitions within, heart a-wearied by the confusion of it all, groping, stumbling, jostled and jostling, hitting this way and that, with the fever high in his blood, and his feet aching and bleeding; sometimes the polish of culture on the surface; _some_times rags and dirt; but underneath the same thing....