Queen Summer or, The Tourney of the Lily and the Rose 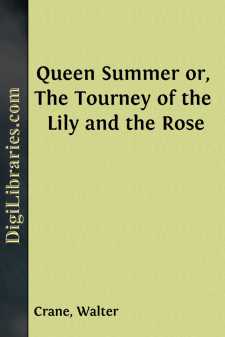 Round Time’s dial thronged the hours,Masking in the Masque of Flowers

Like knights and ladies fair be-dightIn silk attire, both red and white.

And as the winds about them played,And shook the flowers or disarrayed,

A whispered word among them goesOf how the Lily flouts the Rose,

Suitors for Summer’s favor dear,To win the crown of all the year—And how each champion brave would fight,Queen Summer to decide the right.

Then shrill the wind-winged heralds blew;The lists were set in Summer’s view,

And spread with ’broidered hangings gay,Till all was ready for the fray.

Between their banners white and red,Of Rose and Lily overhead,Queen Summer took her judgment seat,Whom all the crowd of flowers did greet.

Nor long the Lily knight delayed;In silver armour white arrayed,He flashed like light upon the scene,A lamp amid the garden green.Milk-white his horse, & housings fairWith silver lilies shining there.

And clashed together, mid a snowOf petals on the grass below.

Pressed eager then the gazing rows:Some cried, “the Lily”, some, “the Rose”But while the fate of battle hung,Again the silver trumpets sung;

And, sudden charging from each side,Of Roses and of Lilies rideA host to still maintain the strifeFor roses or for lilies’ life

And caused the zephyr horns to blowA truce, the victor’s crown to show....