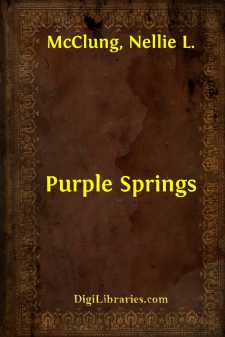 CHAPTER I THE DAY BEFORE

It was the last day of February, the extra day, dead still, and biting cold, with thick, lead-colored skies shading down to inky blue at the western horizon. In the ravine below John Watson's house trees cracked ominously in the frost, and not even a rabbit was stirring. The hens had not come out, though an open door had extended an invitation, and the tamworths had burrowed deeper into the stack of oat straw. The cattle had taken refuge in the big shed, and even old Nap, in spite of his thick Coat, had whimpered at the door to be let in.

Looking out of the western window, Pearl Watson, with a faint wrinkle between her eyebrows, admitted to herself that it was not a cheerful day. And Pearl had her own reasons for wanting fine weather, for tomorrow was the first of March, and the day to which she had been looking forward for three years to make a momentous decision.

The thought of this day had gone with her in the three years that had passed, like a radiant gleam, a glorious presence that brightened and idealized every experience of life, a rainbow that glorified every black cloud, and there had been some clouds in her life black enough to bring out the rainbows' colors too; as when her mother's serious illness had called her back from the city, where she was attending school. But each day had brought her one day nearer the great day, which now she could call "Tomorrow."

It had never occurred to Pearl to doubt the young doctor's sincerity, when, three years before, he had said he would wait until she was eighteen years old before he asked her something.

"And it will depend on your answer," he had said, "what sort of a day it is. It may be a dark, cold, horrible day, with cruel, biting wind, or it may be a glorious day, all sunshine and blue skyвЂ”that will all depend on your answer." And she had told him, honestly and truthfully, not being skilled in the art of coquetry, that "it generally was fine on the first of March."

That the young doctor might have forgotten all about the incident never crossed her mind in the years that followed. She did not know that there was witchery in her brown eyes and her radiant young beauty that would stir any young man's heart and loosen his tongue, causing him to say what in his sober moments he would regard as foolishness.

Pearl did not know this; she only knew that a great radiance had come to her that day, three years before, a radiance whose glory had not dimmed. Every thought and action of her life had been influenced by it, and she had developed like a fine young tree on which the spring sunshine had perpetually fallen, a fine young tree that had been sheltered from every cold blast, watered by the rains and bathed in perpetual sunshine, for Pearl's young heart was fed from the hidden springs of love and romance. For her the darkest night was lighted by stars; for her the birds sang of love and hope and happiness; for her the commonest flower was rich in beauty and perfume; and so the end of the three years found her a well developed, tall, boyishly athletic girl, with a color in her cheeks like an Okanagon peach, hair of richest brown, with little gleams of gold, waving back naturally from a high forehead; a firm chin, with a dimple; and great brown eyes, full of lights, and with a dazzling brilliance that registered every thought of her brain and emotion of her heart....