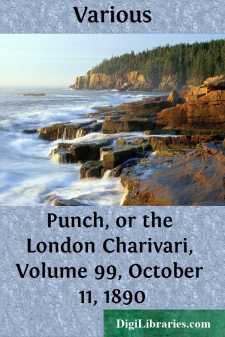 The Court over which Sir JAMES HANNEN presides was instituted for the purification of morals by the separation of ill-assorted couples. Matrimonial errors, which had hitherto stood upon the level of political grievances, capable of redress only after the careful and unbiassed attention of British legislators had been, at much expense both of time and money, devoted to them, were henceforth to form the subject of a special procedure in a division of the Courts of Law created for the purpose, and honestly calculated to bring separation and divorce within the reach even of the most modest incomes. The tyrant man, as usual, favoured himself by the rules he laid down for the playing of the game. For whereas infidelity on the part of the wife is held to be, in itself, a sufficient cause for pronouncing a decree in favour of the husband, a kind, though constantly unfaithful husband, is protected from divorce, and only punished by separation from the wife he has wronged. It is necessary for a man to add either cruelty or desertion to his other offence, in order that his wife may obtain from the laws of her country the opportunity of marrying someone else. But the wit of woman has proved equal to the emergency. Nowhere, it may be safely stated, have more tales of purely imaginative atrocity been listened to with greater attention, or with more favourable results, than in the Divorce Court. On an incautious handshake a sprained wrist and an arm bruised into all the colours of the rainbow have been not infrequently grafted. A British imprecation, and a banged door, have often become floods of invective and a knock-down blow; and a molehill of a pinch has, under favourable cultivation, been developed into a mountain of ill-treatment, on the top of which a victorious wife has in the end, triumphantly planted the banner of freedom.

Hence the Divorce Court, after some years of suspicion, has gradually come to be looked upon as one of the sacred institutions of the country. And, speaking generally, those who make use of its facilities, however much certain of the more strait-laced may frown, are considered by society at large to have done a thing which is surprisingly right and often enviable. The result at any rate is that the number of the divorced increases year by year, and that a lady whose failings have been established against her by a judicial decree, may be quite sure of a hand of ardent sympathisers of both sexes, amongst whom she can hold her head as high as her inclination prompts her without exciting a larger number of spiteful comments than are allotted to her immaculate and undecreed sisters. She may not have been able to abide the question of the Counsel who cross-examined her, but she is certainly free, even in a wider sense than before. She may not, perhaps, stand on so lofty a social pinnacle as the merely-separated lady whose husband still lives, and to whose male friends the fact that she in practically husbandless, and at the same time disabled from marriage, gives a delightful sense both of zest and security....