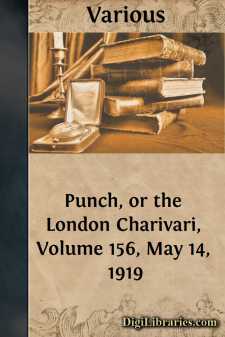 BACK TO THE CAM.

College head-porters as a class assuredly rank amongst the dignified things of the earth. One may admire the martial splendour of a Brigadier-General, and it is not to be denied that Rear-Admirals have a certain something about them which excites both awe and delight, but they are never quite the same thing as a college head-porter. There may be weak spots in the profession, and indeed in one or two of the less self-respecting colleges the head-porters scarcely rise above the level of the Dons; but these are distinctly exceptional. As a class they stand, as I said, amongst the dignified things of life.

Parsons is our head-porter, and perhaps he is the sublimest of them all. Freshmen raise their squares to him, and Oriental students can rarely bring themselves to enter the porter's lodge during their first term without previously removing their shoes. Few except fourth-year men have the temerity to address him as "Parsons" to his face; it seems such an awful thing to do, like keeping a chapel in bedroom slippers or walking arm-in-arm with a Blue. You feel awkward about it.

In order to give you a shadowy idea of Parsons' majesty I must hark back for a moment to a certain day in November, 1914, when Biffin and I, after a brief dalliance with the C.U.O.T.C., left Cambridge to join our regiments. It was pouring with rain, but we were elated in spirit; we had our commissions; things were going to happen; we felt almost in case to jostle a constable. As we passed out through the porter's lodge Parsons sat at his table, imperturbable and austere, his eagle eyes flashing from beneath his bushy brows and his venerable beard sweeping his breast. At that moment Biffin, overwrought with excitement, forgot himself.

Then, realising the enormity of his act, he turned suddenly pale, dashed out into the road and dived panic-stricken into the waiting taxi. We made good our escape.

Those seven stars represent the War. I take a childlike pleasure in dismissing Armageddon in this brusque fashion. If you have had anything at all to do with it you will understand.

Having been demobilised at a relatively early date, out of respect for our pivotal intellects, Biffin and I were bound for Cambridge, to take up the threads of learning where WILHELM had snapped them some years previously. Both of us have changed a little. Biffin has been burnt brown by the suns of Egypt, while I wear a small souvenir of Flanders on my upper lip.

"I wonder if Parsons will remember us," said Biffin as the train thundered into the station.

"Of course he will," I replied. "Parsons never forgets anything."

As our taxi drew up before the portals of Alma Mater the first person we saw, standing on the steps of the porter's lodge, was Parsons. He was as Olympian as ever. As soon as you saw him you felt that, though they might abolish compulsory Greek or introduce a Finance Tripos, they would never be able to subdue the ancient spirit of the University....