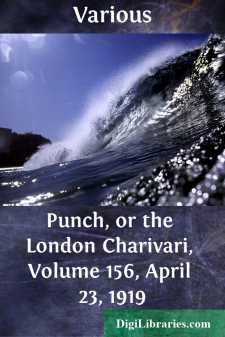 Mr. Phillybag was demobilised. The Day had come. For months he had dreamed of the possibility—had imagined the joy and alacrity with which he would doff his cap, tunic and trousers, service dress, one each, and resume the decent broadcloth of a successful City solicitor. Strangely enough, however, once he was actually demobilised he found himself in no hurry to lose the garb which showed that he, Mr. Phillybag, had helped, you know, to put the kybosh on the KAISER. He was proud too of the corporal's stripes which he had gained in a very short Army career.

That explains why he was in uniform this morning in his office, when he opened a letter from Ernest Williams, his former junior clerk. He remembered Williams well—how in the early days of the War that youth had seen Lord KITCHENER point his finger from the hoardings at him, and there and then, discovering that the Ordnance Department possessed a cap, size 6-7/8, which fitted him, had followed instructions and immediately commenced to wear it. Now he had written to Mr. Phillybag to inform him that, as he expected to be demobilised shortly, he was calling at eleven o'clock to discuss the question of re-entering his employ.

Mr. Phillybag rubbed his hands together in satisfaction. He was looking forward to the interview. Since Armistice Day he had read every article he could find written on the subject of demobilisation and its humours; consequently he knew exactly what he was expected to do. When Williams entered, in all the glory of a Captain's stars, perhaps even a Major's crown, the ribbon of the D.S.O. or the M.C., or both, on his breast, he, Corporal Phillybag, would spring smartly to attention, salute and address his junior clerk as "Sir."

He chuckled with delight as he visualised the piquant scene. Reseating himself, he would briskly resume his interrupted work for a moment while be kept his superior officer waiting. Then—

"Mr. Williams to see you, Sir," said one of his clerks.

On his appearance Mr. Phillybag suffered a slight recoil, but recovered himself quickly and exchanged embarrassed greetings. An awkward pause followed. At length Mr. Phillybag broke it.

"Williams," he said severely, "I'm surprised at you. Who ever heard of an employee returning to civil life from the Army with a lower rank than the one his employer holds? Four years in khaki and only a lance-corporal! You've spoiled my whole morning. It's men with careers like yours who make the profession of humorous journalism so precarious."

A SOUVENIR OF COLOGNE.

"Am I really awake, or is it all a beautiful dream?" I said, pinching myself to make sure.

At the other end of the room an unmistakably German band was playing "Roses of Picardy," while all around me German waiters were running about deferentially, with trays in their hands. Even as I wondered one of them approached and laid the bill on my table with a friendly smile and "Tree mark, bleesir."

Then I remembered that I was at the British Officers' Club in Cologne....