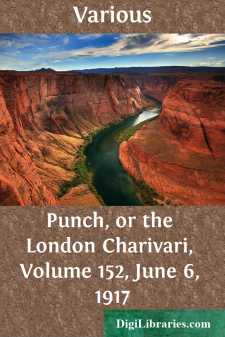 (In the manner of various contemporaries.)

DEAR SIR,—I seem to have read somewhere of the extreme sagacity and intelligence shown by the baboons of South Africa, some of whom, as well as I remember, are employed as porters and, I think, station-masters on the railways in the interior of Cape Colony. My gardener and coachman having both been called up, it has occurred to me that I might find efficient substitutes for them in these excellent animals.

Perhaps you or some of your readers would kindly inform me what it would cost to import two trustworthy baboons, also what would be a fair wage to give them; whether they would come under the provisions of the National Insurance Act, and whether they are vegetarians or carnivorous? Any other information bearing on their tastes and habits would be gratefully received by

[You should communicate with the Director of the Zoological Gardens, Regent's Park. We believe that baboons can be booked at special rates. Possibly they might be allowed to work their passage over as stokers? As regards wages, payment in kind is generally preferred to money. The baboon is a vegetarian but no bigot, and will eat mutton chops without protest. The great American nature historian, WARD, tells us that we should not give the elephant tobacco, but lays no embargo on its being offered to baboons. They are addicted to spirituous liquors, and on the whole it is best to get them to take the pledge. A valued correspondent of ours, Canon Phibbs, once had a tame gorilla which invariably accompanied Mrs. Phibbs at Penny Readings; but this interesting animal died suddenly from a surfeit of mushrooms, and Canon Phibbs has also joined the majority.—ED. Daily Swallow.] POODLES ON THE LAND.

DEAR SIR,—Poodles have from time immemorial been employed to hunt for and dig out truffles in France. May I suggest to all owners of dogs of this highly intelligent breed that they should use them (1) for digging in gardens and allotments; (2) in place of caddies on golf links? May I add that poodles ought not to be shaved with a safety-razor, but should be trimmed by a topiary expert?

[We are most grateful to our correspondent for her information and the humane suggestion with which it is coupled. Truffle-hunting is indeed a noble sport.—ED. Daily Scoop.] "KILL THAT FLY."

DEAR SIR,—As a dead set is being made against dogs by some uncompromising food economists, may I point out on behalf of our four-footed friends what admirable service they render the community by the destruction of flies? My Irish terrier, Patsy, spends half his time catching blue-bottles—indeed, my husband, who is of a mathematical turn, estimates that he accounts for several hundreds every day. Faithfully yours, VERAX.

[Patsy has indeed deserved well of the commonwealth. Some official recognition is clearly called for, preferably a special collar—unstarched, of course—recording his services.—ED....
Show more
Show less