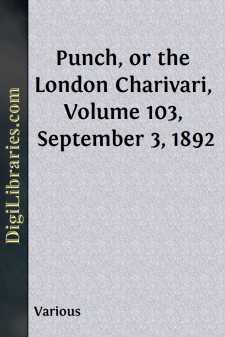 NOT GOING AWAY FOR THE HOLIDAYS.

Cookson Gaze, Q.C. Because MARIA votes Eastbourne vulgar, and the girls (sorry now I sent them to that finishing-school at Clapham) laugh so consumedly whenever I open my mouth to address a native if we go to Trouville or Dinard.

C. Jumper. Because the Governor thinks three days in the year enough for anybody.

Eastend Dr. Because that fiver will just give little SALLY the breath of sea-air she wants, and she'll never make a good cure unless she has it.

Reg. Rake. Because wife says she shall certainly accompany me.

Barmaid. Because I've just been ill for a fortnight from overwork, and the Company say they can't give any more leave.

Eastend Clergyman (of any church.) Because there are hundreds who want it more than I do, and I must help them to get a change first.

Major Hornblower. Because MACCRACSHOTT (the only man who has asked me) was in the smoking-room the night I was fool enough to tell that Snipe and Rhinoceros Story of PEYTON's in the first person.

Quiverful. Because there's another pair.

EPITAPH ON AN OLD CRICKETER'S TOMBSTONE.—"Out at 70."

Popping a Question.—The Daily News, in its last week's "Music and Musicians," informs us that "Mr. CHAPPELL has now definitely decided that the season of Monday Popular Concerts shall this year commence on a Tuesday." Sure then it must be Mister O'CHAPPELL, the CHAPPELL by the hill-side, who arranges to have his first "Monday Pop" on a Tuesday? If he be going out shooting on his own native heath, his name O'CHAPPELL, then there's no reason why he shouldn't have his first pop on a Tuesday, only it couldn't be his Monday Pop, could it now? Or if he drinks Mr. P.'s health in Pommery '80 (grand vin!), or let's say Poppery '80, he could do so on a Tuesday, only it would no longer be the "Monday Pop." That's all. Sure 'tis mighty confusing and upsets the week entirely. If Tuesday is to have all the Pop, what's to become of Monday? For further particulars inquire at the Pop-shop, Bond Street.

The next great Musical Event is at the Gloucester Festival—it is Dr. HUBERT PARRY "on the Job." This, though the work of a thoroughly English Composer, may yet be considered as an "Article de Parry."

"MARS IN OPPOSITION."—"Mother says I mustn't."

THIS PICTURE AND THAT. (Extracts from the Diary of a Lover of the Beautiful.)

First Extract.—Really an excellent notion to buy an estate, instead of picking up what Mr. RUDYARD KIPLING calls a "smeared thing." Got one, too, pretty cheap. Twenty miles from a railway station, but so much the better. RUSKIN hates railway stations, and so do I. Never can make them look picturesque. The Agent tells me my place is famous for its sunsets; also good moonlight effects on occasions. Pretty village, too, in the background. Altogether, most satisfactory. After all, Nature is much better than Art.

Second Extract.—Dullerton-on-the-Slush is a charming spot, but it has its drawbacks. Pretty, but damp. Fog interferes a good deal with the sunsets, and hides the moon at the wrong moment....