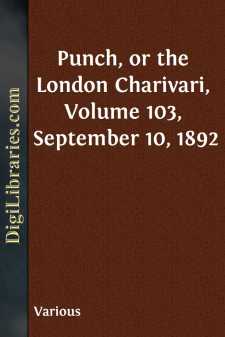 WHY I DON'T WRITE PLAYS. (From the Common-place Book of a Novelist.)

Because it is so much pleasanter to read one's work than to hear it on the Stage.

Because Publishers are far more amiable to deal with than Actor-Managers.

Because "behind the scenes" is such a disappointing place—except in Novels.

Because why waste three weeks on writing a Play, when it takes only three years to compose a Novel?

Because Critics who send articles to Magazines inviting one to contribute to the Stage, have no right to dictate to us.

Because all Novelists hire their pens in advance for years, and have no time left for outside labour.

And last, and (perhaps) not least, Why don't I send in a Play? Because I have tried to write one, and find I can't quite manage it!

According to recent accounts, the attitude of the Salvation Army in Canada may be fairly described as "Revolting."

Rising Young Physician (who cured so many Patients in last year's Epidemic). "NOT MUCH CHANCE OF MORE INFLUENZA IN ENGLAND THIS WINTER, I FANCY!"

His Wife. "LET US HOPE FOR THE BEST, DEAREST!"

A DIARY OF THE DEAD SEASON. (Suggested by the Contents Bills.)

Monday.—First appearance of "the Epidemic." Good bold line with reference to Russia. Not of sufficient importance to head the Bill, but still distinctly taking.

Tuesday.—Quite a feature. Centre of the Bill with sub-lines of "Horrible Disclosures," and "Painful Scenes." Becoming a boom. To be further developed to-morrow.

Wednesday.—Bill all "Epidemic." Even Cricket sacrificed to make room for it. "News from Abroad." "Horrors at Hamburg." No idea it would turn out so well. A perfect treasure-trove at this quiet season of the year!

Thursday.—Nothing but "Epidemic"—"Arrival in England"—"Precautions Everywhere." Let the boom go! It feeds itself! Nearly as good as a foreign war!

Friday.—Still "the Epidemic," but requires strengthening. "Spreading in the Provinces," but still, not like it was. Falling flat.

SONGS OF SOCIETY; I.—INTRODUCTORY. TO MY LYRE.

["Smoothly written vers de Société, where a boudoir decorum is, or ought always to be, preserved; where sentiment never surges into passion, and where humour never overflows into boisterous merriment."—Frederick Locker's Preface to "Lyra Elegantiarum."]

If one would sing with grace and glow

One must not dream of fire, or length,

Or vivid touch, or virile strength,

Among the Muses of Mayfair

A Bacchanal with unbound hair,

Would be as purely out of place

As Atalanta in a race

Our Muse, dear Lyra, must be trim,

Must not indulge in vagrant whim,

Of voice or vesture.

No gleaming eye, no glowing brow,