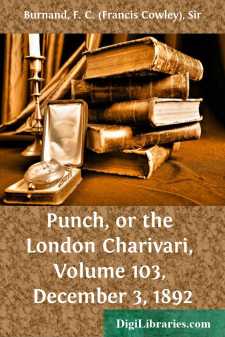 "I dreamed," said the Scotch Professor, "that I was struggling for dear life with a monstrous reptile, whose scaly coils wound about my body, while the extremity of his own was lost in the distance. At last I managed to shake myself free, and setting my foot on his neck, I was preparing to cut his throat, when the animal looked up at me with an appealing expression, and said, 'At least you might give me a testimonial!'"

This professional nightmare (for the labours of a Scotch instructor consist, to a great extent, in writing testimonials, or in evading requests for them), suggested to one of his audience the history of Saunders McGregor, the Man who would Get on. In boyhood, Saunders obtained an exhibition, or bursary, to the University of St. Mungo's. This success implied no high degree of scholarship, for the benefice was only open to persons of the surname of McGregor, and the Christian-name of Saunders. The provident parents of our hero, having accidentally become aware of this circumstance, had their offspring christened Saunders, and thus secured, from the very first, an opening for the young man.

At St. Mungo's, Saunders was mainly notable for a generous view of life, which enabled him to look on the goods of others as practically common among Christians. A pipe of his own he somehow possessed, but tobacco and lights he invariably borrowed, also golf-balls, postage-stamps, railway fares, books, caps, gowns, and similar trifles; while his nature was so social, that he invariably dropped in to supper with one or other of his companions. The accident of being left alone for a few moments in the study of our Examiner, where Saunders deftly possessed himself of a set of examination-papers, enabled him to take his degree with an ease and brilliance which very considerably astonished his instructors. By adroitly using his good fortune, Saunders accumulated a pile of most egregious testimonials, and these he regarded as the mainspring of success in life. He had early discovered in himself a singular capacity for drawing salaries, and as he had unbounded conceit and unqualified ignorance, he conceived himself to be fit for any post in life to which a salary is attached. He had also really great gifts as a crampon, or hanger-on, and neglected no opportunity, while he made many, of securing useful acquaintances. Thus it was the custom of his college to elect, at stated periods, a man of eminence as Rector. Saunders at once constituted himself secretary of a committee, and, without consulting his associates, wrote invitations to eminent politicians, poets, painters, actors, editors, clergymen, and other people much in the public eye. In these effusions he poured forth the innocent enthusiasm of his heart, expressing an admiration which might seem excessive to all but its objects. They, with the guilelessness of mature age and conscious merit, were touched by Saunders's expressions of esteem, which they set down to hero-worship, and a fervent study of Mr....