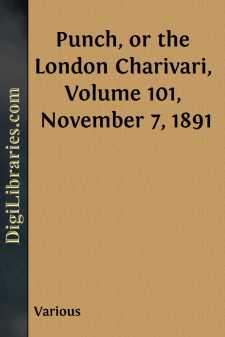 We learn by telegraph from Berlin that some uneasiness exists in that capital owing to demonstrations made by the photographists and artists in plaster-of-Paris, who have been accustomed to reproduce likenesses and busts of His Imperial Majesty. They complain that, owing to a measure of uncertainty about the EMPEROR's personal appearance from day to day, they have large stocks thrown on their hands, and are reduced to a condition approaching bankruptcy. The crisis has been precipitated by the circumstance that, just when the combined trades, recovering from their first disaster, had produced a Christmas stock of portraits and busts, showing His Majesty with a beard, he shaved it off, and once more they have their goods returned on their hands. Prussian 3-1/2 per Cents. have fallen to 83-85.

When Sir AUGUSTUS DRURIOLANUS read in the Times that Signor LAGO had been granted the QUEEN's permission to prefix "Royal" to his opera entertainment at the Shaftesbury Theatre, it gave him so great a shock that, but for the opportune ("opera-tune," Sir AUGUSTUS jocosely put it) arrival of Dr. ROBSON ROUSTEM PASHA, the shock might have had a serious effect.

On Monday last, at half-past three, the King of SPAIN cut a new tooth, His Majesty's seventh acquisition in this class of property. The happy event was celebrated by a salute of seventeen guns.

"What's that?" asked His Majesty, awakened by the roar from his siesta.

"Sire," said the Field-Marshal commanding the troops, bringing his trusty Toledo to the salute, "your Majesty has condescended to cut a tooth."

"That's all very well to begin with," said the King; "but, when I grow a little older, I mean to cut a dash."

Previous to the appointment of Mr. ARTHUR BALFOUR, much speculation was indulged in as to the succession to the Leadership of the House of Commons. In Conservative circles there was an almost universal desire to see the place filled by a noble Baron well-known for the assiduity with which he arrives in town to transact business in Bouverie Street, returning to his country seat the same evening.

During the interval after it had been made known that the Leadership of the House of Commons had been offered to Mr. BALFOUR, and whilst his decision was anxiously awaited, Sir WILLIAM HARCOURT was asked whether he thought the Chief Secretary would take the place.

"Who can say, TOBY mio?" answered the Squire, stroking his chin, with a far-away glance. "The situation reminds me of an incident that came under my notice when I represented Oxford borough. One of my constituents, a worthy pastor, had had a call to another and much wealthier church. He asked for time to consider the proposal. One afternoon, a fortnight later, I met his son in High Street, and inquired whether his father had decided to take the new place. 'Well,' said the youngster, 'Pa is still praying for light, but most of the things are packed.'"

We understand that an innovation will be introduced at Guildhall on the occasion of the Lord MAYOR's dinner....