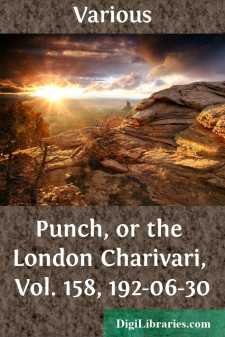 [Now that holiday-planning is in season we have pleasure in announcing a few proposed schemes for the recreation of some of the mighty brains that shape our destinies and guide our groping intelligences. But it must be clearly understood that in these inconstant times we cannot vouch for their authenticity or guarantee fulfilment.]

Mr. Asquith's recent success in spotting the winner of the Derby is believed to have inspired Mr. Lloyd George with an idea of combining his present policy of always going one, if not two or three, better than the Old Man with a public demonstration of the extent to which the crude Puritanism of his youth has been mellowed by sympathies more in keeping with his later political alliances. He is credited with the intention of putting to appropriate use his peculiar gifts of non-committal prophecy and persuasive casuistry, and at the same time making sure of a profitable holiday in the open air by "doing" the Sussex Fortnight, beginning with the Goodwood meeting, in the capacity of Downy Dave, a race-course tipster.

There is reason to believe that, if the Recess should afford Sir William Sutherland an opportunity to indulge his craving for the Simple Life, he will proceed to Italy to join the coterie of ascetics known as the Assisi Set. His conspicuous ability in telling the tale to the London Pressmen encourages expectations that he will be no less successful as a preacher to the birds, after the manner of St. Francis, the founder of the cult.

In financial circles it is expected that Mr. Chamberlain will spend the vacation incognito in the neighbourhood of Blackpool, partly for the sake of the invigorating air, but mainly, in view of the abnormal prosperity of Lancashire, for the purpose of considering on the spot the possibilities of a levy on capital as a local experiment.

A rumour is current in Whitehall, and gains colour from the activity in certain seaports, that, in consequence of Earl Curzon's having been informed that the number of Channel-swimmers is likely to be unusually large this summer, his lordship has decided to take command of a fleet of Foreign Office launches, which will patrol the coast to make sure that none of these persons is unprovided with a passport.

At Unity House a suspicion is entertained that Sir Eric Geddes contemplates utilising the holidays for the double purpose of working off superfluous steam and familiarizing himself with the true attitude of the railwaymen by working as a stoker on one of the great main lines. Should this scheme be carried into effect arrangements are in readiness to compel him to become a member of the N.U.R.

It is hoped that Mr. Augustus John will be able to accompany Lord Beaverbrook to Canada this summer, so that his lordship may gratify his lifelong ambition to be painted by Mr. John, with the primeval backwoods for a setting, in the character of a coureur-des-bois, of the type immortalized by Sir Gilbert Parker in Pierre.