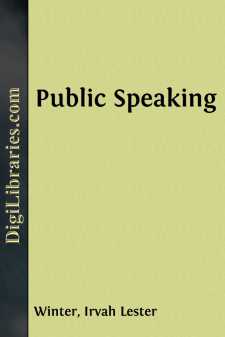 This book is designed to set forth the main principles of effective platform delivery, and to provide a large body of material for student practice. The work laid out may be used to form a separate course of study, or a course of training running parallel with a course in debating or other original speaking. It has been prepared with a view also to that large number who want to speak, or have to speak, but cannot have the advantage of a teacher. Much is therefore said in the way of caution, and untechnical language is used throughout.

The discussion of principles in Part One is intended as a help towards the student's understanding of his task, and also as a common basis of criticism in the relation between teacher and pupil. The preliminary fundamental work of Part Two, Technical Training, deals first with the right formation of tone, the development of voice as such, the securing of a fixed right vocal habit. Following comes the adapting of this improved voice to the varieties of use, or expressional effect, demanded of the public speaker. After this critical detailed drill, the student is to take the platform, and apply his acquired technique to continued discourse, receiving criticism after each entire piece of work.

The question as to what should be the plan and the content of Part Three, Platform Practice, has been determined simply by asking what are the distinctly varied conditions under which men most frequently speak. It is regarded as profitable for the student to practice, at least to some extent, in all the several kinds of speech here chosen. In thus cultivating versatility, he will greatly enlarge his power of expression, and will, at length, discover wherein lies his own special capability.

The principal aim in choosing the selections has been to have them sufficiently alive to be attractive to younger speakers, and not so heavy as to be unsuited to their powers. Some of them have proved effective by use; many others are new. In all cases they are of good quality.

It is hoped that the new features of the book will be found useful. One of these is a group of lighter after-dinner speeches and anecdotes. It has been said that, in present-day speech-making, humor has supplanted former-day eloquence. It plays anyway a considerable part in various kinds of speaking. The young speaker is generally ineffective in the expression of pleasantry, even his own. Practice in the speaking of wholesome humor is good for cultivating quality of voice and ease of manner, and for developing the faculty of giving humorous turn to one's own thought. It is also entertaining to fellow students. Other new features in the book are a practice section for the kind of informal speaking suited to the club or the classroom, and a section given to the occasional poem, the kind of poem that is associated with speech- making.

A considerable space is given to argumentative selections because of the general interest in debating, and because a need has been felt for something suited for special forensic practice among students of law....