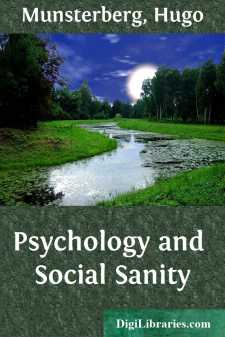 It has always seemed to me a particular duty of the psychologist from time to time to leave his laboratory and with his little contribution to serve the outside interests of the community. Our practical life is filled with psychological problems which have to be solved somehow, and if everything is left to commonsense and to unscientific fancies about the mind, confusion must result, and the psychologist who stands aloof will be to blame.

Hence I tried in my little book “On the Witness Stand” to discuss for those interested in law the value of exact psychology for the problems of the courtroom. In “Psychotherapy” I showed the bearing of a scientific study of the mind on medicine. In “Psychology and the Teacher” I outlined its consequences for educational problems. In “Psychology and Industrial Efficiency” I studied the importance of exact psychology for commerce and industry. And I continue this series by the present little volume, which speaks of psychology's possible service to social sanity. I cannot promise that even this will be the last, as I have not yet touched on psychology's relation to religion, to art, and to politics.

The field which I have approached this time demanded a different kind of treatment from that in the earlier books. There I had aimed at a certain systematic completeness. When we come to the social questions, such a method would be misleading, as any systematic study of these psychological factors is still a hope for the future. Many parts of the field have never yet been touched by the plow of the psychologist. The only method which seems possible to-day is to select a few characteristic topics of social discussion and to outline for each of them in what sense a psychologist might contribute to the solution or might at least further the analysis of the problem. The aim is to show that our social difficulties are ultimately dependent upon mental conditions which ought to be cleared up with the methods of modern psychology.

I selected as illustrations those social questions which seemed to me most significant for our period. A few of them admitted an approach with experimental methods, others merely a dissection of the psychological and psychophysiological roots. The problems of sex, of socialism, and of superstition seemed to me especially important, and if some may blame me for overlooking the problem of suffrage, I can at least refer to the chapter on the jury, which comes quite near to this militant question.

Most of this material appears here for the first time. The chapter on thought transference, however, was published in shorter form in the Metropolitan Magazine, that on the jury, also abbreviated, in the Century Magazine, and that on naïve psychology in the Atlantic Monthly. The paper on sexual education is an argument, and at the same time an answer in a vivid discussion. Last summer I published in the New York Times an article which dealt with the sex problem. It led to vehement attacks from all over the country....