Psychology A Study Of Mental Life 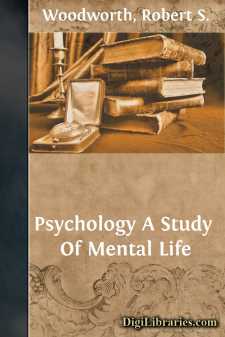 CHAPTER IWHAT PSYCHOLOGY IS AND DOES THE SUBJECT-MATTER OF THE SCIENCE, ITS PROBLEMS AND ITS METHODS

Modern psychology is an attempt to bring the methods of scientific investigation, which have proved immensely fruitful in other fields, to bear upon mental life and its problems. The human individual, the main object of study, is so complex an object, that for a long time it seemed doubtful whether there ever could be real science here; but a beginning was made in the nineteenth century, following the lead of biology and physiology, and the work of the investigator has been so successful that to-day there is quite a respectable body of knowledge to assemble under the title of scientific psychology.

None of these formulas is wholly satisfactory. Psychology does not like to call itself the science of the soul, for that has a theological tang and suggests problems that have so far not seemed accessible to scientific investigation. Psychology does not like very well to call itself the science {2} of the mind, as the mind seems to imply some thing or machine, and there is no such thing to be observed (unless it be the brain and body generally), and, anyway, psychology is distinctly a study of actions rather than of things. Psychology does not like to limit itself to the study of consciousness, but finds it necessary to study also unconscious actions. As to "behavior", it would be a very suitable term, if only it had not become so closely identified with the "behavioristic movement" in psychology, which urges that consciousness should be entirely left out of psychology, or at least disregarded. "Behavior psychology", as the term would be understood to-day, means a part of the subject and not the whole.

[Footnote: A series of waggish critics has evolved the following: "First psychology lost its soul, then it lost its mind, then it lost consciousness; it still has behavior, of a kind."]

The best way of getting a true picture of psychology, and of reaching an adequate definition of its subject-matter, would be to inspect the actual work of psychologists, so as to see what kind of knowledge they are seeking. Such a survey would reveal quite a variety of problems under process of investigation, some of them practical problems, others not directly practical.

One line of question that always interests the beginner in psychology is as to how people differ--how different people act under the same circumstances--and why; and if we watch the professional psychologist, we often find him working at just this problem. He tests a great number of individuals to see how they differ, and tries to discover on what factors their differences depend, how far on heredity, how far on environment....