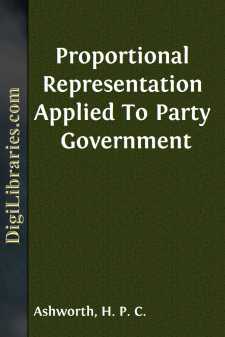 THE TRUE PRINCIPLES OF POLITICAL REPRESENTATION.

Old establishments, like the British Constitution, said Edmund Burke, "are not often constructed after any theory; theories are rather drawn from them." In setting out on an endeavour to understand the principles underlying political representation, the saying expresses exactly the course which should be followed. The inquiry is the more necessary as, although representation more than anything else in the domain of government distinguishes the modern from the ancient world, the ideas which prevail as to the part it has played, is playing, and is destined to play on the world's stage are not merely hazy, but extremely inaccurate. The intimate connection of representation with the progress which has followed its introduction is so little recognized that the most advanced democracies are now willing to listen to any proposal to return to direct government. In spite of the fact that the nineteenth century has witnessed the triumph of the historical method in most fields of social inquiry, the dangers of a priori speculation on political institutions are as much in evidence as when Burke wrote.

If we would understand, then, the meaning of representative institutions, it is in the gradual development of the "mother of parliaments" that we must seek for the most reliable information. We must be careful, however, to leave out of sight those features of the growth of the British Constitution which are merely the expression of transitory social conditions, and to confine our attention to the landmarks which bear directly on the inquiry. The subject is best divided into two stages; the first characterized by the origin of representation; and the second by the division into parties, and the creation of cabinet government.

The First Stage of Representation.—Rightly to understand the conditions which led to the introduction and development of the representative principle, we must look back to the period immediately following the signing of the Great Charter by the tyrant King John.

The Charter reaffirmed the ancient principle that free Englishmen should not be taxed without their consent, and representation was the natural outcome of that provision. A brief glance at the social conditions of the time is necessary to understand why this was so. First, it must be remembered that the true political unit of ancient times was the city or local community. England at that time was a collection of local communities, having more or less a corporate life. Then, again, there were the three estates of the realm—the clergy, the lords, and the commons—who were accustomed to confer with the King on public affairs. The stage which marks the birth of representation was when these different estates and communities were asked to tax themselves to relieve the necessities of the King. It was obviously impossible that the consent of every freeman should be obtained, hence the duty had to be deputed to agents. Now, the idea of agency was not unknown in the ancient world, but that agents should have power to bind those for whom they acted was something entirely new. It was necessary, however, that they should have this power, and it suited the King's convenience that they should exercise it. Already, in the earliest writ of which we have knowledge, summoning each shire to send two good and discreet knights, it was provided that they should be chosen in the stead of each and all. This happened in 1254, and in the following year the clergy were also summoned for the same purpose of granting aid to the King. In the meantime the merchants and trade guilds in the cities were growing rich. The King cast longing eyes on their possessions, and wished to tax them. So we find that in 1264 Simon de Montfort, Earl of Leicester, issued the celebrated writ summoning each of the cities and boroughs to send two of its more discreet and worthy citizens and burgesses....