Procopius History of the Wars, Books V. and VI. 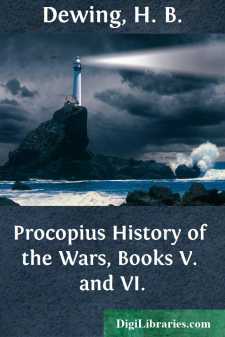 HISTORY OF THE WARS: BOOK V THE GOTHIC WAR I

Such, then, were the fortunes of the Romans in Libya. I shall now proceed to the Gothic War, first telling all that befell the Goths and Italians before this war.

474-491 a.d.During the reign of Zeno Byzantium the power in the West was held by Augustus, whom the Romans used to call by the diminutive name Augustulus because he took over the empire while still a lad,July 31, 475 a.d. his father Orestes, a man of the greatest discretion, administering it as regent for him. Now it happened that the Romans a short time before had induced the Sciri and Alani and certain other Gothic nations to form an alliance with them; and from that time on it was their fortune to suffer at the hand of Alaric and Attila those things which have been told in the previous narrative. And in proportion as the barbarian element among them became strong, just so did the prestige of the Roman soldiers forthwith decline, and under the fair name of alliance they were more and more tyrannized over by the intruders and oppressed by them; so that the barbarians ruthlessly forced many other measures upon the Romans much against their will and finally demanded that they should divide with them the entire land of Italy. And indeed they commanded Orestes to give them the third part of this, and when he would by no means agree to do so, they killed him immediately. July 28, 476 a.d.Now there was a certain man among the Romans named Odoacer, one of the bodyguards of the emperor, and he at that time agreed to carry out their commands, on condition that they should set him upon the throne. And when he had received the supreme power in this way, July 28, 476 a.d.he did the emperor no further harm, but allowed him to live thenceforth as a private citizen. And by giving the third part of the land to the barbarians, and in this way gaining their allegiance most firmly, he held the supreme power securely for ten years.

It was at about this same time that the Goths also, who were dwelling in Thrace with the permission of the emperor, took up arms against the Romans under the leadership of Theoderic, a man who was of patrician rank and had attained the consular office in Byzantium. But the Emperor Zeno, who understood how to settle to his advantage any situation in which he found himself, advised Theoderic to proceed to Italy, attack Odoacer, and win for himself and the Goths the western dominion. For it was better for him, he said, especially as he had attained the senatorial dignity, to force out a usurper and be ruler over all the Romans and Italians than to incur the great risk of a decisive struggle with the emperor.

Now Theoderic was pleased with the suggestion and went to Italy, and he was followed by the Gothic host, who placed in their waggons the women and children and such of their chattels as they were able to take with them. And when they came near the Ionian Gulf, they were quite unable to cross over it, since they had no ships at hand; and so they made the journey around the gulf, advancing through the land of the Taulantii and the other nations of that region....