Prisoners of Poverty Women Wage-Workers, Their Trades and Their Lives 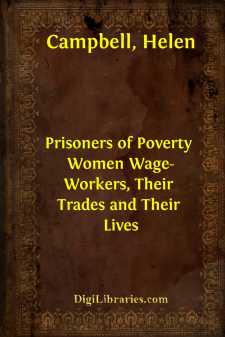 In that antiquity which we who only are the real ancients look back upon as the elder world, counting those days as old which were but the beginning of the time we reckon, there were certain methods with workers that centuries ago ceased to have visible form. The Roman matron, whose susceptibilities from long wear and tear in the observation of fighting gladiators and the other mild amusements of the period, were a trifle blunted, felt no compunction in ordering a disobedient or otherwise objectionable slave into chains, and thereafter claiming the same portion of work as had been given untrammelled. The routine of the day demanded certain offices; but how these offices should be most easily fulfilled was no concern of master or mistress, who required simply fulfilment, and wasted no time on consideration of methods. In the homes of Pompeii, once more open to the sun, are the underground rooms where wretched men and women bowed under the weight of fetters, whose corrosion was not only in weary flesh, but in the no less weary soul; and Rome itself can still show the same remnants of long-forgotten wrong and oppression.

That day is over, and well over, we say. Only for a few barbarians still unreached by the march of civilization is any hint of such conditions possible, and even for them the days of darkness are numbered. And so the century moves on; and the few who question if indeed the bonds are quite broken, if civilization has civilized, and if men and women may claim in full their birthright of “life, liberty, and the pursuit of happiness,” are set down as hopeless carpers,—unpleasant, pragmatic, generally disagreeable objectors to things as they are. Or if it is admitted that there are defects here and there, and that much remains to be remedied, we are pointed with pride to the magnificent institutions of modern charity, where every possible want of all sorts and conditions of men is met and fulfilled.

“What more would you have?” cries the believer in things as they are. “What is higher or finer than the beautiful spirit that has taken permanent form in brick and mortar? Never since time began has charity been on so magnificent a scale; never has it been so intelligent, so far-seeing. No saints of the past were ever more vowed to good works than these uncanonized saints of to-day who give their lives to the poor and count them well lost. Shame on man or woman who questions the beautiful work or dares hint that under this fair surface rottenness and all foulness still seethe and simmer!”

It is not easy in the face of such feeling to affirm that, perfect as the modern system may be, beautiful as is much of the work accomplished, it still is wanting in one element, the lack of which has power to vitiate the whole. No good-will, no charity, however splendid, fills or can fill the place owned by that need which is forever first and most vital between man and man,—justice. No love, no labor, no self-sacrifice even, can balance that scale in which justice has no place. No knowledge nor wisdom nor any understanding that can come to man counts as force in the universe of God till that one word heads the list of all that must be known and loved and lived before ever the kingdom of heaven can begin upon earth.

It is because this is felt and believed by a few as a compelling power, by many as a dimly comprehended need, so far in the shadow that its form is still unknown, that I begin to-day the search for the real presence. What I write will be no fanciful picture of the hedged-in lives the conditions of which I began, many years ago, to study. If names are withheld, and localities not always indicated, it is not because they are not recorded in full, ready for reference or any required corroboration. Where the facts make against the worker, they are given with as minute detail as where they make against the employer....