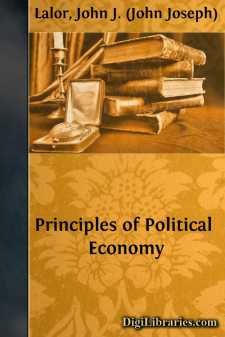 It is no foolish desire to make a vain display of citations, that induces us, at the beginning of this essay, intended to point out the results of the application of a new method to the study of Political Economy, to invoke the authority of a poet and moralist, of a jurisconsult and of a philosopher. The writer finds in the words just quoted the loftiest expression of the thought which dictates these lines, viz.: that the impartial researches of history, a profound feeling of man’s moral and material wants, and the light of philosophy, should govern in the teaching of a science, the object of which is to show us how those things which are intended to satisfy our wants are produced and distributed among the several classes or individuals of a nation; how they are exchanged one against another, and how they are consumed.

The nineteenth century affords us something more than the admirable spectacle of the rapid and fertile development of mechanical power and natural forces. This is but one of the aspects, we might even say but one of the results, of the general progress of the human mind. The renovation of moral and intellectual studies has served as a starting point for the application to facts of the conquests of thought. Science has preceded art.

In the foremost rank of the studies just referred to is philosophy, which initiates us into the knowledge of human nature, the basis of right, and which translates its legitimate aspirations into a language which we can understand; history, that prophetess of the truth, as one of the ancients called it, which places before us the faithful picture of times past, not by simply putting together a skeleton of facts, but by following the living progress of events and the organic development of institutions. Such, at least, has been the work of those noble minds who have consecrated their energies to the resuscitation of ages past, in their true shape, and such is the service for which we are indebted to them for the successful accomplishment of the reformation of historical studies, which they attempted with such rare devotion and such marvelous sagacity.

This renovation of history has exerted the most fertile influence in the region of philosophy, in that of law, and we believe that it will prove no less useful in that of Political Economy. It has served to put us on our guard against being easily misled by a priori notions.

By exhibiting to us the results of the life and of the experience of centuries, by teaching us by what steps the human mind has risen to its present eminence, and what the education given it in the past has been, it has enabled us to ascend from phenomena to the principles which preside over them; from facts to the law; and it has substituted for arbitrary assumptions and purely ideal systems, the slow but progressive work of the genius of nations. Not that it turns a deaf ear to the exalted lessons of philosophy, nor that it denies the eternal relations resulting from the nature of things. Far from it. On the contrary, it supplies a solid basis to intellectual investigations, and, so to speak, an answer for all the moral sciences, to this saying of Rœderer: “Politics is a field which has been traversed thus far only in a balloon; it is time to put foot on solid ground.”

Neither does history, as thus understood, confine itself to mere description; it also assumes the office of judge. While it pulls down much that passion and inaccuracy have reared, and thus restores respect for the past, it does not turn that past into a fetish. It looks it boldly in the face and questions it, instead of prostrating itself before it and worshipping it with downcast eyes. Thus, by plainly showing us the many bonds which tie us to it, it escapes at once both the rashness of impatience and the wearisomeness of routine....