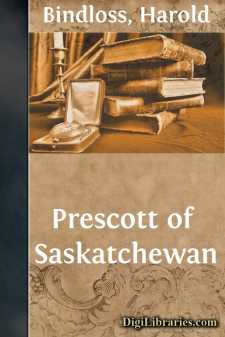 The air was cooling down toward evening at Sebastian, where an unpicturesque collection of wooden houses stand upon a branch line on the Canadian prairie. The place is not attractive during the earlier portion of the short northern summer, when for the greater part of every week it lies sweltering in heat, in spite of the strong west winds that drive dust-clouds through its rutted streets. As a rule, during the remaining day or two the temperature sharply falls, thunder crashes between downpours of heavy rain, and the wet plank sidewalks provide a badly-needed refuge from the cement-like “gumbo” mire.

The day, however, had been cloudless and unusually hot. Prescott had driven in from his wheat farm at some distance from the settlement, and he now walked toward the hotel. He was twenty-eight years old, of average height and rather spare figure; his face, which had been deeply bronzed by frost and sun, was what is called open, his gray eyes were clear and steady, the set of his lips and mould of chin firm. He looked honest and good-natured, but one who could, when necessary, sturdily hold his own. His attire was simple: a wide gray hat, a saffron-colored shirt with flannel collar, and a light tweed suit, something the worse for wear.

As he passed along the sidewalk he looked about. The small, frame houses were destitute of paint and any pretense of beauty, a number of them had raised, square fronts which hid the shingled roofs; but beyond the end of the street there was the prairie stretching back to the horizon. In the foreground it was a sweep of fading green and pale ocher; farther off it was tinged with gray and purple; and where it cut the glow of green and pink on the skyline a long birch bluff ran in a cold blue smear. To the left of the opening rose three grain elevators: huge wooden towers with their tops narrowed in and devices of stars and flour-bags painted on them. At their feet ran the railroad track, encumbered with a string of freight-cars; a tall water-tank, a grimy stage for unloading coal, and a small office shack marked the station.

Prescott, however, did not notice much of this; he was more interested in the signs of conflict on the persons of the men he met. Some looked as if they had been violently rolled in the dust; others wore torn jackets; and the faces of several were disfigured by bruises. Empty bottles, which make handy clubs, were suggestively scattered about the road. All this was unusual, but Prescott supposed some allowance must be made for the fact that it was the anniversary of the famous victory of the Boyne. Moreover, there was a community of foreign immigrants, mixed with some Irishmen and French Canadians, but all professing the Romish faith, engaged in some railroad work not far away.

In front of the hotel ran a veranda supported on wooden pillars, and a row of chairs was set out on the match-strewn sidewalk beneath it. Most of them were occupied by after-supper loungers, and several of the men bore scars....