Prehistoric Structures of Central America Who Erected Them?

by Martin I. (Martin Ingham) Townsend 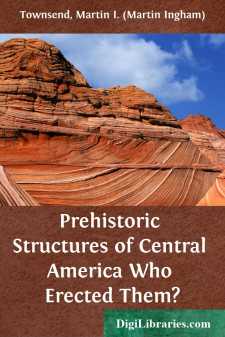 It was not a long period after 1492, when the great Italian navigator with his Spanish crew made their first discoveries upon the central portion of America, that the Europeans, who had followed the footsteps of Christopher Columbus, began to fall in with structures of great magnitude and architectural beauty scattered widely throughout Mexico, Guatemala and Yucatan, &c.; and when the conquest of Peru was achieved, artificial highways and water courses were found there, such as could have owed their existence to no people but one with advanced knowledge of science as well as of the arts of civilized life. No people existed then upon this continent capable of doing the work which so astonished the world.

Thinking men and dreaming men have, from the earliest of these discoveries, been busying themselves to find out when, and by what people, these early monuments to human efforts were constructed.

Norwegian discoverers and Welsh emigrants have been pressed into the service. Our own Donnelly has changed the place where God and history had located the origin of the human race in the valley of the Tigris and Euphrates, to a suppositious island in the Atlantic Ocean, and led out the nations of the earth from there to Asia, Africa and western Europe, until he had no further need of the island and then sunk it in “the bottom of the sea.”

A whole people have been pressed into the service of explaining this mystery. The convenient “Lost ten tribes of the House of Israel” have been set to do this work, as their fathers were compelled to “make brick without straw” in the Land of Egypt, and then suffered to escape to some land where search for them would be in vain.

The following treatise is written for the purpose of showing—

First.—That the lands where these structures exist were known to commercial people and to many of the scholars of the countries about the Mediterranean Sea for at least a thousand years before the Christian Era.

Second.—That these discoveries were made by the people of Phœnecia, originally located on the eastern border of the Mediterranean Sea, and by their colonies settled about Carthage in Africa, and throughout Spain and Portugal up to the Ebro; and who traversed every ocean almost as thoroughly as have their Anglo Saxon successors for the past four hundred years.

Third.—That the origin of the people who made these structures is shown, to absolute certainty, by the character of the architecture and by the character of the religious belief exhibited upon the temples which were erected to Baal, or Moloch, i. e. the Sun, who was their God, who was worshiped by the immolation of their infant children upon his altars.

This is proven as fully by the carvings and frescoes in Mexico and Guatemala, and by the stone circle of Sillustani, in the high country of Peru, and the figures inscribed upon the great entrance to the cemetery of Tiahuanuco in the same region, as if a thousand witnesses arose from the dead and testified before us.

PREHISTORIC CENTRAL AMERICA AND PERU. THE ANCIENT GREEK AND ROMAN SCHOLARS KNEW OF THE EXISTENCE OF THE WESTERN CONTINENT.

In the earlier existence of the Greek and Roman peoples, knowledge was extremely limited. These peoples were without any mode of perpetuating or transmitting knowledge until the days, a little more than a thousand years before the Christian Era, when Cadmus brought from Phœnecia the letters which had been invented and adopted there for the representation and expression of articulate sounds; and by the combination of these letters to transmit and perpetuate human ideas. There is scarce a race of savages in our day where the mass of the body politic are as profoundly ignorant as were the great body of the Greek people a thousand years before Christ.

Even those men who made such acquisitions of knowledge as were possible in that day, could only learn from the lips of their imperfectly trained teacher, and by travel to those countries which the barbarous condition of the world allowed them to visit; and even after the learned men of the Greek Islands came to know the power of letters, how small must have been the amount of knowledge existing in the world, and how slow must have been its spread amongst the untaught commonalty of the then Greek world? In the day when the Phœnician ship Argo made a voyage to Colchis, at the east end of the Black Sea, it so fired the imagination of the Greek poets that they dreamed of the voyage and composed poems about it for centuries....