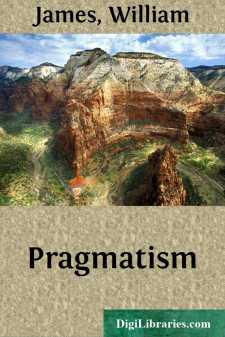 The lectures that follow were delivered at the Lowell Institute in Boston in November and December, 1906, and in January, 1907, at Columbia University, in New York. They are printed as delivered, without developments or notes. The pragmatic movement, so-called—I do not like the name, but apparently it is too late to change it— seems to have rather suddenly precipitated itself out of the air. A number of tendencies that have always existed in philosophy have all at once become conscious of themselves collectively, and of their combined mission; and this has occurred in so many countries, and from so many different points of view, that much unconcerted statement has resulted. I have sought to unify the picture as it presents itself to my own eyes, dealing in broad strokes, and avoiding minute controversy. Much futile controversy might have been avoided, I believe, if our critics had been willing to wait until we got our message fairly out.

If my lectures interest any reader in the general subject, he will doubtless wish to read farther. I therefore give him a few references.

Probably the best statements to begin with however, are F. C. S. Schiller's in his 'Studies in Humanism,' especially the essays numbered i, v, vi, vii, xviii and xix. His previous essays and in general the polemic literature of the subject are fully referred to in his footnotes.

Furthermore, see G. Milhaud: le Rationnel, 1898, and the finearticles by Le Roy in the Revue de Metaphysique, vols. 7, 8 and 9.Also articles by Blondel and de Sailly in the Annales de PhilosophieChretienne, 4me Serie, vols. 2 and 3. Papini announces a book onPragmatism, in the French language, to be published very soon.

To avoid one misunderstanding at least, let me say that there is no logical connexion between pragmatism, as I understand it, and a doctrine which I have recently set forth as 'radical empiricism.' The latter stands on its own feet. One may entirely reject it and still be a pragmatist.

The Present Dilemma in Philosophy

Chesterton quoted. Everyone has a philosophy. Temperament is a factor in all philosophizing. Rationalists and empiricists. The tender-minded and the tough-minded. Most men wish both facts and religion. Empiricism gives facts without religion. Rationalism gives religion without facts. The layman's dilemma. The unreality in rationalistic systems. Leibnitz on the damned, as an example. M. I. Swift on the optimism of idealists. Pragmatism as a mediating system. An objection. Reply: philosophies have characters like men, and are liable to as summary judgments. Spencer as an example.

The squirrel. Pragmatism as a method. History of the method. Its character and affinities. How it contrasts with rationalism and intellectualism. A 'corridor theory.' Pragmatism as a theory of truth, equivalent to 'humanism.' Earlier views of mathematical, logical, and natural truth. More recent views. Schiller's and Dewey's 'instrumental' view. The formation of new beliefs. Older truth always has to be kept account of. Older truth arose similarly. The 'humanistic' doctrine. Rationalistic criticisms of it. Pragmatism as mediator between empiricism and religion. Barrenness of transcendental idealism. How far the concept of the Absolute must be called true. The true is the good in the way of belief. The clash of truths. Pragmatism unstiffens discussion.