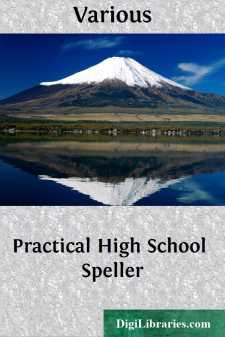 What are the words most commonly misspelled by the average high school pupil? In an endeavor to solve this problem, two thousand letters, with five postal cards in each, were sent to representative high schools in every state in the United States, requesting the heads of the various departments to report the words most commonly misspelled in their classes. From the many thousand replies, this text-book has been compiled.

The first word in Lesson I was sent in by seven hundred high school teachers; the other words in this lesson show, by their order, the frequency with which they appear in the replies. No word has been considered unless suggested by at least two teachers. This book, then, built on the judgment of those best qualified to know—the teachers themselves—contains only the words most frequently misspelled by the average high school pupil.

A simple phrase is placed after each word, illustrating its use, and serving to identify it better than would a short, abstract definition. The division of words into syllables with accent marks will be of great assistance to the pupil, should there be any question in his mind as to the correct pronunciation. The typography is based on the idea that it will be a great help to the pupil in visualizing the words if he sees them in script as well as in print.

When the diphthongs ei and ie are pronounced [=e], c is followed by ei, all other letters by ie. Examples: ceiling, receive, siege, believe. Exceptions: leisure, seize, weird. The word slice will help pupils to remember this rule—i after l and e after c when applied to believe and receive.

Final y following a consonant changes to i before a suffix not beginning with i. Examples: busy, business; dry, dried. When the suffix begins with i, as in -ing and -ish, the y is retained to avoid having double i. Examples: try, trying; baby, babyish.

When the final y follows a vowel, the y is retained before a suffix. Examples: toy, toyed; betray, betrayed; annoy, annoyed.

To form the plural of words ending in y following a consonant change the y to i and add es. Examples: quantity, quantities; factory, factories.

Monosyllables and words accented on the last syllable, which end in a single consonant, following a single vowel, double the final consonant before a suffix beginning with a vowel. Examples: hot, hotter; begin, beginning. Exceptions: (1) gas, gases. (2) The letters w, x, and y are not doubled. Examples: show, showing; box, boxed; pay, paying.

In words not accented on the last syllable, the final consonant may or may not be doubled. Examples: traveler may be spelled traveller; canceled, cancelled; etc.

In words ending in unaccented e, the final e is dropped before a suffix beginning with a vowel. Examples: come, coming; glue, gluing; fine, finer. Exceptions: (1) The e is retained when it is necessary to preserve the identity of the word, as dyeing, singeing....