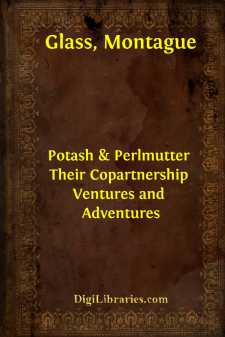 "No, siree, sir," Abe Potash exclaimed as he drew a check to the order of his attorney for a hundred and fifty dollars, "I would positively go it alone from now on till I die, Noblestone. I got my stomach full with Pincus Vesell already, and if Andrew Carnegie would come to me and tell me he wants to go with me as partners together in the cloak and suit business, I would say 'No,' so sick and tired of partners I am."

For the twentieth time he examined the dissolution agreement which had ended the firm of Vesell & Potash, and then he sighed heavily and placed the document in his breast pocket.

"Cost me enough, Noblestone, I could assure you," he said.

"A hundred and fifty ain't much, Potash, for a big lawyer like Feldman," Noblestone commented.

Abe flipped his fingers in a gesture of deprecation.

"That is the least, Noblestone," he rejoined. "First and last I bet you I am out five thousand dollars on Vesell. That feller got an idee that there ain't nothing to the cloak and suit business but auction pinochle and taking out-of-town customers to the theayter. Hard work is something which he don't know nothing about at all. He should of been in the brokering business."

"The brokering business ain't such a cinch neither," Noblestone retorted with some show of indignation. "A feller what's in the brokering business has got his troubles, too, Potash. Here I've been trying to find an opening for a bright young feller with five thousand dollars cash, y'understand, and also there ain't a better designer in the business, y'understand, and I couldn't do a thing with the proposition. Always everybody turns me down. Either they got a partner already or they're like yourself, Potash, they just got through with a partner which done 'em up good."

"If you think Pincus Vesell done me up good, Noblestone," Potash said, "you are mistaken. I got better judgment as to let a lowlife like him get into me, Noblestone. I lost money by him, y'understand, but at the same time he didn't make nothing neither. Vesell is one of them fellers what you hear about which is nobody's enemy but his own."

"The way he talks to me, Potash," Noblestone replied, "he ain't such friends to you neither."

"He hates me worser as poison," Abe declared fervently, "but that ain't neither here nor there, Noblestone. I'm content he should be my enemy. He's the kind of feller what if we would part friends, he would come back every week and touch me for five dollars yet. The feller ain't got no money and he ain't got no judgment neither."

"But here is a young feller which he got lots of common sense and five thousand dollars cash," Noblestone went on. "Only one thing which he ain't got."

"I seen lots of them fellers in my time, Noblestone," he said. "Everything about 'em is all right excepting one thing and that's always a killer."

"Well, this one thing ain't a killer at all," Noblestone rejoined, "he knows the cloak and suit business from A to Z, and he's a first-class A number one feller for the inside, Potash, but he ain't no salesman."

"So long as he's good on the inside, Noblestone," Abe said, "it don't do no harm if he ain't a salesman, because there's lots of fellers in the cloak and suit business which calls themselves drummers, y'understand Every week regular they turn in an expense account as big as a doctor's bill already, and not only they ain't salesmen, Noblestone, but they don't know enough about the inside work to get a job as assistant shipping clerk."