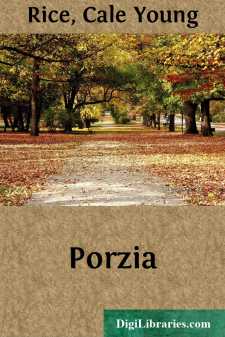 Scene: A portion of the house, terrace and garden of Rizzio on his wedding day at Naples. It is so situated as to command a view of the city, the blue Bay with Capri set like a topaz in it, the Vesuvian coast, and the Mountain itself—rising like a calm though unappeasable monitor against the land's too sensual enchantment.

The house, a white corner of which is visible along the right, has large doors toward the back giving upon the terrace. A vine-clad terrace wall, several feet above the level of the terrace, but much above that of the street without, runs across the rear to a cypress-set gate in the centre, and on into the lustrous Spring foliage of ilex, myrtle and orange.

A pedestaled image of the Virgin against the house, a statue of Pan before a bower opposite, and several stone seats forward, are decked with orange blossoms that glow in the light of late afternoon.

Music, reveling, and laughter are heard, muffled, within. Then amid a louder burst of them Osio strides angrily forth. He is followed in argumentative elation by Rizzio—clothed in Greek raiment, a book in his hand—and by Bruno.

Osio (as they come down).

Proof from the teeth of aliens and fools

I want no proof! your books should burn in Hell!

Because they glorify the stars in heaven?

I say they are heresy!

And I say truth!

That were your ears not stopped with sophistries

And Jesuitry you would adjudge divine!

[Porzia appears anxiously at the door.

We need but look,

To learn that stars are worlds

Swung out upon infinitudes of space.

And as for earth—

Tho Christ shed blood upon it—

'Tis but a pilgrim flame among them all.

Osio (turning upon him).

And you, a monk, will say so to the Church

And to the Holy Office?

And you, Rizzio, who on your wedding-day,

And revels to Apollo,

Wear pagan robes—and prink others in them—

Rizzio (laughing at him).

What, what, my merry raging brother, more?

That Pan is not your god, whom I but now

Besought for inward beauty and truth of soul?

That Plato and the ancients are

A plague which only the Pope can purge from earth?

Ai! to the flames with them, and with all fairness!

I say that you—

Hey, yea! that I who fall

Not on my knees to mitred villainy—

Or cringe to crosiered craft—

And yet whose life is lit for truth and freedom—

Am viler far than you

Who take your pleasure and pay it with confession?

Who think the Devil with faith would be no Devil?

You hear it, Bruno?

I say there is one thing

You shall not do!

My breaker of betrothals—if not creeds—

And that is what?