Popular Education For the use of Parents and Teachers, and for Young Persons of Both Sexes 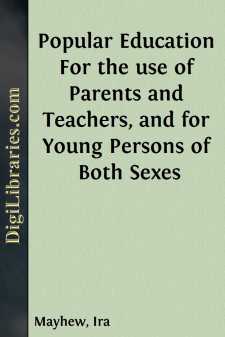 Who is sufficient for these things? is a question which any one may well ask when sitting down to the preparation of a treatise on popular education. The author of this work would have shrunk from the undertaking, but from deference to the judgment of the honorable body that unanimously invited its preparation. He has also been encouraged not a little by many kind friends, one of whom, distinguished for his labors in the department of public instruction, writing from New England, says, "I rejoice at your good beginnings at the West. You have a noble and inspiring field of action. 'No pent-up Utica contracts your powers.' I beseech you, fail not to fill it with your glorious educational truth, though you should pour out your spirit and your life to do so."

The duties required by law of the Superintendent of Public Instruction in the State of Michigan are comparatively few. The author, however, five years ago, and soon after entering upon the discharge of those duties, undertook voluntary labors for the purpose of awakening a deeper interest with all classes of the community in behalf of common schools, and of inspiring confidence in their redeeming power, when improved as they may be, constituting, as they do, the only reliable instrumentality for the proper training of the rising generation. These labors, which were hailed as promising great usefulness, and which were prosecuted in every county of the state, were every where received with unexpected favor, and constitute the foundation of the present volume. Many of the subjects then discussed are here greatly amplified.

Among the lectures referred to in the resolution under which this work has been undertaken, was one on the "Michigan School System." But as the Convention for the revision of the Constitution of this state is now in session, it has been deemed advisable to omit, in this connection, the extensive consideration of the details of that system. This may constitute the theme of a small manual which shall hereafter appear.

In the present volume the author has endeavored so to present the subject of popular education, which should have reference to the whole man—the body, the mind, and the heart—and so to unfold its nature, advantages, and claims, as to make it every where acceptable. Nay, more, he would have a good common education considered as the inalienable right of every child in the community, and have it placed first among the necessaries of life. For the better accomplishment of his object, he has freely drawn from the writings of practical educators, his aim being usefulness rather than originality. This course has been adopted, in some instances, for the sole purpose of enforcing the sentiments inculcated by the authority of the names introduced. Acknowledgments have generally been made in the body of the work. These may have been unintentionally omitted in some instances, and especially in those portions of the work which were written several years ago, and the sources whence information was drawn are now unknown.

An examination of the table of contents, and especially of the index at the end of the volume, will show the range of subjects considered, and their adaptation to the wants and necessities, I may say, of the several classes of persons named in the title-page, for whose use it was undertaken. Written, as it has been, for Parents and Teachers, and for Young Persons of both sexes, it is what its title implies—a treatise on Popular Education—and is equally applicable to the wants of families and schools in every portion of our wide-spread country.

With all its imperfections, of which no one can be more sensible than the author, this volume is given to the public, with the hope that it may contribute, in some degree, to advance the work of general education in the United States, but more especially in the State of Michigan....