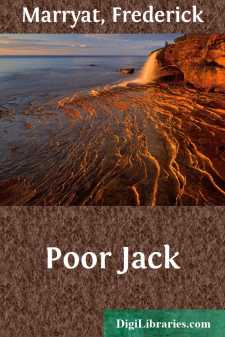 In which, like most People who tell their own Stories, I begin with the Histories of other People.

I have every reason to believe that I was born in the year of our Lord 1786, for more than once I put the question to my father, and he invariably made the same reply: "Why, Jack, you were launched a few months before the Druids were turned over to the Melpomene." I have since ascertained that this remarkable event occurred in January 1787. But my father always reckoned in this way: if you asked him when such an event took place, he would reply, so many years or months after such a naval engagement or remarkable occurrence; as, for instance, when I one day inquired how many years he had served the King, he responded, "I came into the sarvice a little afore the battle of Bunker's Hill, in which we licked the Americans clean out of Boston." As for Anno Domini, he had no notion of it whatever.

I have since heard a different version of the result of this battle.

Who my grandfather was, I cannot inform the reader, nor is it, perhaps, of much consequence. My father was a man who invariably looked forward, and hated anything like retrospection: he never mentioned either his father or his mother; perhaps he was not personally acquainted with them. All I could collect from him at intervals was, that he served in a collier from South Shields, and that a few months after his apprenticeship was out, he found himself one fine morning on board of a man-of-war, having been picked up in a state of unconsciousness, and hoisted up the side without his knowledge or consent. Some people may infer from this that he was at the time tipsy; he never told me so; all he said was, "Why, Jack, the fact is when they picked me up I was quite altogether non pompus." I also collected at various times the following facts—that he was put into the mizzentop, and served three years in the West Indies; that he was transferred to the maintop, and served five years in the Mediterranean; that he was made captain of the foretop, and sailed six years in the East Indies; and, at last, was rated captain's coxswain in the "Druid" frigate, attached to the Channel fleet cruising during the peace. Having thus condensed the genealogical and chronological part of this history, I now come to a portion of it in which it will be necessary that I should enter more into detail.

The frigate in which my father eventually served as captain's coxswain was commanded by a Sir Hercules Hawkingtrefylyan, Baronet. He was very poor and very proud, for baronets were not so common in those days. He was a very large man, standing six feet high, and with what is termed a considerable bow-window in front; but at the same time portly in his carriage. He wore his hair well powdered, exacted the utmost degree of ceremony and respect, and considered that even speaking to one of his officers was paying them a very high compliment: as for being asked to his table, there were but few who could boast of having had that honor, and even those few perhaps not more than once in the year. But he was, as I have said, very poor; and moreover he was a married man, which reminds me that I must introduce his lady, who, as the ship was on Channel service, had lodgings at the port near to which the frigate was stationed, and occasionally came on board to take a passage when the frigate changed her station to the eastward or to the westward. Lady Hercules, as we were directed to call her by Sir Hercules, was as large in dimensions, and ten times more proud than her husband. She was an excessive fine lady in every respect; and whenever she made her appearance on board, the ship's company looked upon her with the greatest awe. She had a great dislike to ships and sailors; officers she seldom condescended to notice; and pitch and tar were her abomination. Sir Hercules himself submitted to her dictation; and, had she lived on board, she would have commanded the ship: fortunately for the service, she was always very seasick when she was taking a passage, and therefore did no mischief....