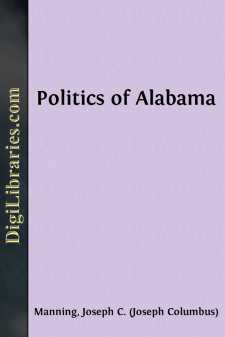 Until recently, embracing the past several months, almost national attention has been centered upon the politics of Alabama.

Notice was first attracted by the famous Kolb-Jones gubernatorial contest. This campaign was something novel in the South, for until then, there had not been, for years, any probability of defeat to the organized Democracy in Alabama.

However, during the Kolb-Jones political fight, astute “organized” Democratic leaders soon expressed such grave apprehensions of the success of their ticket that, only a few weeks before the time had come for the state election (Aug. 1, 1892), Alabama was in the throes of such political excitement as had probably never before been known in the history of that commonwealth. This fervor increased up to the day of election, when, as is known to the entire country, Capt. R. F. Kolb swept the state with cyclonic victory, notwithstanding the fact that he was defrauded by the manipulations of the ballot-box stuffers, unscrupulous returning-officers and unprincipled members of canvassing-boards. Another man is to-day occupying the seat to which Captain Kolb is entitled, with the absolute acquaintance of the certainty of this statement, and with the perfect knowledge that a vast majority of the people of Alabama are fully aware that, inasmuch as he has assumed it wrongfully, he is unworthy of the trust. What a shameful and revolting spectacle!

President Hayes was never more despised by the people of Alabama, than is Governor Jones by the common people of his own state.

No better or more interesting recital could be given of the rightful claims of Captain Kolb, than is made in his open letter, written December 15, 1892, and addressed to the General Assembly and people of Alabama. In this letter Captain Kolb makes a demand for justice, gives well-known facts that are susceptible of proof, makes statements of particular frauds, and asks why an investigation of the matter is not permitted and the people allowed to choose their own public servants. The letter is as follows:

“To the Members of the General Assembly of Alabama, and the People of Alabama:

“As I have so far been denied the official rights conferred upon me by a sovereign people, I deem it my duty to address this open letter to the members of the Legislature and people of Alabama, and respectfully ask for an impartial hearing. ‘Let justice be done, though the heavens fall.’ On the 1st of December, 1892, a conscienceless and corrupt oligarchy overturned the republican form of government in Alabama, and installed as the de facto governor, a man who was not elected to the office. I feel that I am airing no mere private or personal grievance in thus protesting against and denouncing this great crime against law, order and civil liberty. I would be an unfaithful steward and unworthy of the sacred trust confided to me by the people of Alabama at the polls in August last, if I remained silent under the circumstances. Two years ago the Democratic party, in convention assembled, refused to nominate for governor the acknowledged choice of a majority of the party. For the sake of harmony, I bided my time for another two years, believing that the people would then rise in their majesty and throw off the tyrannous yoke of party bosses. On the 8th of June last, the Democratic party again assembled in state convention, to nominate candidates for governor and other state officers, and for a second time, the rights and wishes of the people were over-ridden by fraud and the unfair use of party machinery in the election of delegates thereto. My friends did everything in their power to bring about a fair and honorable settlement of all differences existing between the two factions of the Democratic party in the state. All overtures in this direction were treated with scorn and derision by the so-called ‘organized’ Democracy, and we were forced to organize our own state convention, which was composed exclusively of life-long Democrats. This convention nominated a full state ticket and appealed to the justice-loving hearts of the true, sovereign people of Alabama, for their verdict on the first Monday in August. The issues between the two factions of the party were fully presented by both sides of the controversy, in the most memorable campaign ever known in the political history of the state. On the first Monday in August, the people spoke at the ballot-box in thunder tones and declared that the ticket headed by myself for governor, received a majority of over 45,000 of the votes cast, fully 25,000 of that majority being white voters....