Poets and Dreamers Studies and translations from the Irish 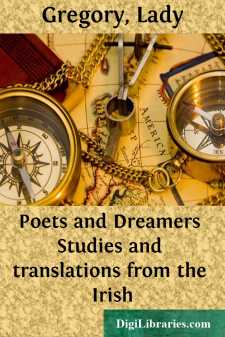 One winter afternoon as I sat by the fire in a ward of Gort Workhouse, I listened to two old women arguing about the merits of two rival poets they had seen and heard in their childhood.

One old woman, who was from Kilchreest, said: 'Raftery hadn't a stim of sight; and he travelled the whole nation; and he was the best poet that ever was, and the best fiddler. It was always at my father's house, opposite the big tree, that he used to stop when he was in Kilchreest. I often saw him; but I didn't take much notice of him then, being a child; it was after that I used to hear so much about him. Though he was blind, he could serve himself with his knife and fork as well as any man with his sight. I remember the way he used to cut the meat—across, like this. Callinan was nothing to him.'

The other old woman, who was from Craughwell, said: 'Callinan was a great deal better than him; and he could make songs in English as well as in Irish; Raftery would run from where Callinan was. And he was a nice respectable man, too, with cows and sheep, and a kind man. He would never put anything that wasn't nice into a poem, and he would never run anyone down; but if you were the worst in the world, he'd make you the best in it; and when his wife lost her beetle, he made a song of fifteen verses about it.'

'Well,' the Kilchreest old woman admitted, 'Raftery would run people down; he was someway bitter; and if he had anything against a person, he'd give him a great lacerating. But there were more for him than for Callinan; some used to say Callinan's songs were too long.'

'I tell you,' said the other, 'Callinan was a nice man and a nice neighbour. Raftery wasn't fit to put beside him. Callinan was a man that would go out of his own back door, and make a poem about the four quarters of the earth. I tell you, you would stand in the snow to listen to Callinan!' But, just then, a bedridden old woman suddenly sat up and began to sing Raftery's 'Bridget Vesach' as long as her breath lasted; so the last word was for him after all.

Raftery died over sixty years ago; but there are many old people still living, besides those two old women, who have seen him, and who keep his songs in their memory. What they tell of him shows how closely he was in the old tradition of the bards, the wandering poets of two thousand years or more. His satire, his praises, his competitions with other poets were the dread and the pride of many Galway and Mayo parishes. And now the songs that he never wrote down, being blind, are known, if not as our people say, 'all over the world,' at least in all places where Irish is spoken.

Raftery's satires, as I have heard them repeated by the country people, do not seem, even in their rhymed original—he only composed in Irish—to have the 'sharp spur' of some of his predecessors, such as O'Higinn, whose tongue was cut out by men from Sligo, who had suffered from it, or O'Daly, who criticised the poverty of the Irish chiefs in the sixteenth century until the servant of one of them stuck a knife into his throat....