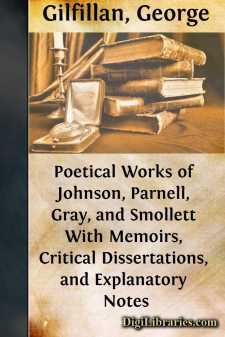 We feel considerable trepidation in beginning a life of Johnson, not so much on account of the magnitude of the man—for in Milton, and one or two others, we have already met his match—but on account of the fact that the field has been so thoroughly exhausted by former writers. It is in the shadow of Boswell, the best of all biographers, and not in that of Johnson, that we feel ourselves at present cowering. Yet we must try to give a rapid account of the leading incidents in Johnson's life, as well as a short estimate of his vast, rugged genius.

Samuel Johnson was born at Lichfield, Staffordshire, on the 18th of September 1709, and was baptized the same day. His father was Michael Johnson, a bookseller and stationer, and his mother, Sarah Ford. Samuel was the first-born of the family. Nathaniel, who died in his twenty-fifth year, was the second and the last. Johnson very early began to manifest both his peculiar prejudices and his peculiar powers. When a mere child, we see him in Lichfield Cathedral, perched on his father's shoulders, gazing at Sacheverel, the famous Tory preacher. We hear him, about the same time, roaring to his mother, who had given him, a minute before, a collect in the Common Prayer-Book to get by heart as his day's task,—"Mother, I can say it already!" His first teacher, Dame Oliver, a widow, thought him, as she well might, the best scholar she ever had. From her he passed into the hands of one Tom Brown, an original, who once published a spelling-book, and dedicated it "to the Universe!"—without permission, we presume. He began to learn Latin first with a Mr Hawkins, and then with a Mr Hunter, head-master of Lichfield,—a petty tyrant, although a good scholar, under whom, to use Gay's language, Johnson was

"Lash'd into Latin by the tingling rod."

At the age of fifteen, he was transferred to Stourbridge school, and to the care of a Mr Wentworth, who "taught him a great deal." There he remained twelve months, at the close of which he returned home, and for two years lived in his father's house, in comparative idleness, loitering in the fields, and reading much, but desultorily. In 1728, being flattered with some promises of aid from a Shropshire gentleman, named Corbet, which were never fulfilled, he went to Oxford, and was entered as a commoner in Pembroke College. His father accompanied and introduced him to Dr Adams, and to Jorden, who became his tutor, recommending his son as a good scholar and a poet. Under Jorden's care, however, he did little except translate Pope's "Messiah" into Latin verse,—a task which he performed with great rapidity, and so well, that Pope warmly commended it when he saw it printed in a miscellany of poems. About this time, the hypochondriac affection, which rendered Johnson's long life a long disease, began to manifest itself. In the vacation of 1729, he was seized with the darkest despondency, which he tried to alleviate by violent exercise and other means, but in vain....