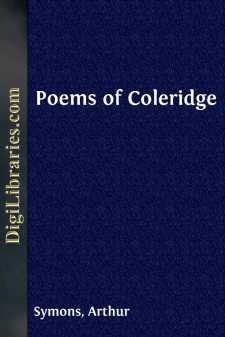 In one of Rossetti's invaluable notes on poetry, he tells us that to him "the leading point about Coleridge's work is its human love." We may remember Coleridge's own words:

Yet love, though it is the word which he uses of himself, is not really what he himself meant when using it, but rather an affectionate sympathy, in which there seems to have been little element of passion. Writing to his wife, during that first absence in Germany, whose solitude tried him so much, he laments that there is "no one to love." "Love is the vital air of my genius," he tells her, and adds: "I am deeply convinced that if I were to remain a few years among objects for whom I had no affection, I should wholly lose the powers of intellect."

With this incessant, passionless sensibility, it was not unnatural that his thirst for friendship was stronger than his need of love; that to him friendship was hardly distinguishable from love. Throughout all his letters there is a series of causeless explosions of emotion, which it is hardly possible to take seriously, but which, far from being insincere, is really, no doubt, the dribbling overflow of choked-up feelings, a sort of moral leakage. It might be said of Coleridge, in the phrase which he used of Nelson, that he was "heart-starved." Tied for life to a woman with whom he had not one essential sympathy, the whole of his nature was put out of focus; and perhaps nothing but "the joy of grief," and the terrible and fettering power of luxuriating over his own sorrows, and tracing them to first principles, outside himself or in the depths of his sub- consciousness, gave him the courage to support that long, everpresent divorce.

Both for his good and evil, he had never been able to endure emotion without either diluting or intensifying it with thought, and with always self-conscious thought. He uses identically the same words in writing his last, deeply moved letter to Mary Evans, and in relating the matter to Southey. He cannot get away from words; coming as near to sincerity as he can, words are always between him and his emotion. Hence his over-emphasis, his rhetoric of humility. In 1794 he writes to his brother George: "Mine eyes gush out with tears, my heart is sick and languid with the weight of unmerited kindness." Nine days later he writes to his brother James: "My conduct towards you, and towards my other brothers, has displayed a strange combination of madness, ingratitude, and dishonesty. But you forgive me. May my Maker forgive me! May the time arrive when I shall have forgiven myself!" Here we see both what he calls his "gangrened sensibility" and a complete abandonment to the feelings of the moment. It is always a self- conscious abandonment, during which he watches himself with approval, and seems to be saying: "Now that is truly 'feeling'!" He can never concentrate himself on any emotion; he swims about in floods of his own tears. With so little sense of reality in anything, he has no sense of the reality of direct emotion, but is preoccupied, from the moment of the first shock, in exploring it for its universal principle, and then nourishes it almost in triumph at what he has discovered....