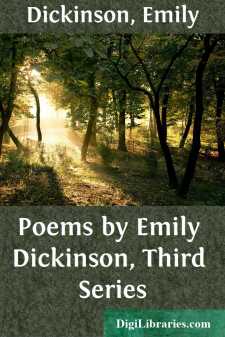 'T is little I could care for pearls  Who own the ample sea;Or brooches, when the Emperor  With rubies pelteth me;

Or gold, who am the Prince of Mines;  Or diamonds, when I seeA diadem to fit a dome  Continual crowning me.

Superiority to fate  Is difficult to learn.'T is not conferred by any,  But possible to earn

A pittance at a time,  Until, to her surprise,The soul with strict economy  Subsists till Paradise.

Hope is a subtle glutton;  He feeds upon the fair;And yet, inspected closely,  What abstinence is there!

His is the halcyon table  That never seats but one,And whatsoever is consumed  The same amounts remain.

Forbidden fruit a flavor has  That lawful orchards mocks;How luscious lies the pea within  The pod that Duty locks!

Heaven is what I cannot reach!  The apple on the tree,Provided it do hopeless hang,  That 'heaven' is, to me.

The color on the cruising cloud,  The interdicted groundBehind the hill, the house behind, —  There Paradise is found!

A word is deadWhen it is said,  Some say.I say it justBegins to live  That day.

To venerate the simple days  Which lead the seasons by,Needs but to remember  That from you or meThey may take the trifle  Termed mortality!

To invest existence with a stately air,Needs but to remember  That the acorn thereIs the egg of forests  For the upper air!

It's such a little thing to weep,  So short a thing to sigh;And yet by trades the size of these  We men and women die!

Drowning is not so pitiful  As the attempt to rise.Three times, 't is said, a sinking man  Comes up to face the skies,And then declines forever  To that abhorred abodeWhere hope and he part company, —  For he is grasped of God.The Maker's cordial visage,  However good to see,Is shunned, we must admit it,  Like an adversity.

How still the bells in steeples stand,  Till, swollen with the sky,They leap upon their silver feet  In frantic melody!

If the foolish call them 'flowers,'  Need the wiser tell?If the savans 'classify' them,  It is just as well!

Could we stand with that old Moses  Canaan denied, —Scan, like him, the stately landscape  On the other side, —

Doubtless we should deem superfluous  Many sciencesNot pursued by learnèd angels  In scholastic skies!

Low amid that glad Belles lettres  Grant that we may stand,Stars, amid profound Galaxies,  At that grand 'Right hand'!

Could mortal lip divine  The undeveloped freightOf a delivered syllable,  'T would crumble with the weight.

My life closed twice before its close;  It yet remains to seeIf Immortality unveil  A third event to me,

So huge, so hopeless to conceive,  As these that twice befell....