Poems and Songs of Robert Burns 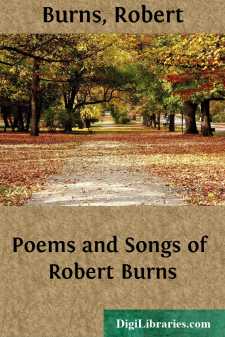 Robert Burns was born near Ayr, Scotland, 25th of January, 1759. He was the son of William Burnes, or Burness, at the time of the poet's birth a nurseryman on the banks of the Doon in Ayrshire. His father, though always extremely poor, attempted to give his children a fair education, and Robert, who was the eldest, went to school for three years in a neighboring village, and later, for shorter periods, to three other schools in the vicinity. But it was to his father and to his own reading that he owed the more important part of his education; and by the time that he had reached manhood he had a good knowledge of English, a reading knowledge of French, and a fairly wide acquaintance with the masterpieces of English literature from the time of Shakespeare to his own day. In 1766 William Burness rented on borrowed money the farm of Mount Oliphant, and in taking his share in the effort to make this undertaking succeed, the future poet seems to have seriously overstrained his physique. In 1771 the family move to Lochlea, and Burns went to the neighboring town of Irvine to learn flax-dressing. The only result of this experiment, however, was the formation of an acquaintance with a dissipated sailor, whom he afterward blamed as the prompter of his first licentious adventures. His father died in 1784, and with his brother Gilbert the poet rented the farm of Mossgiel; but this venture was as unsuccessful as the others. He had meantime formed an irregular intimacy with Jean Armour, for which he was censured by the Kirk-session. As a result of his farming misfortunes, and the attempts of his father-in-law to overthrow his irregular marriage with Jean, he resolved to emigrate; and in order to raise money for the passage he published (Kilmarnock, 1786) a volume of the poems which he had been composing from time to time for some years. This volume was unexpectedly successful, so that, instead of sailing for the West Indies, he went up to Edinburgh, and during that winter he was the chief literary celebrity of the season. An enlarged edition of his poems was published there in 1787, and the money derived from this enabled him to aid his brother in Mossgiel, and to take and stock for himself the farm of Ellisland in Dumfriesshire. His fame as poet had reconciled the Armours to the connection, and having now regularly married Jean, he brought her to Ellisland, and once more tried farming for three years. Continued ill-success, however, led him, in 1791, to abandon Ellisland, and he moved to Dumfries, where he had obtained a position in the Excise. But he was now thoroughly discouraged; his work was mere drudgery; his tendency to take his relaxation in debauchery increased the weakness of a constitution early undermined; and he died at Dumfries in his thirty-eighth year.

It is not necessary here to attempt to disentangle or explain away the numerous amours in which he was engaged through the greater part of his life. It is evident that Burns was a man of extremely passionate nature and fond of conviviality; and the misfortunes of his lot combined with his natural tendencies to drive him to frequent excesses of self-indulgence....